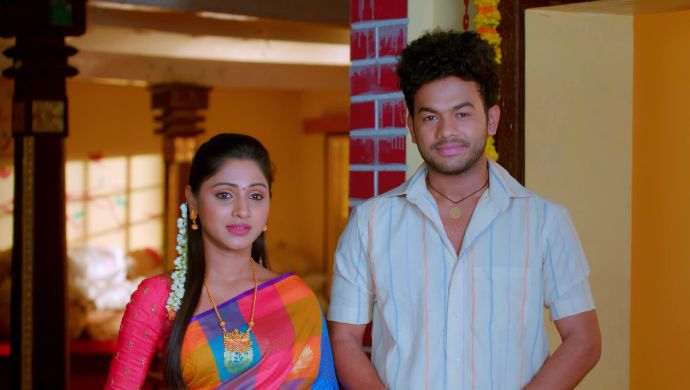 Last week in Paaru, Akhila and Raghu come to Veerayya’s house to partake in the rituals. Before they can exchange rings, the groom refuses to get married to Janani as he says that she has been seen with another boy. He also tells him that he will only marry her if Veerayya possesses enough property. Raghu celebrates the fact that Veerayya lost the challenge of getting his daughter married within four days. Having said that, Veerayya arranges for Preethu and Janani to get married.

This week, Paaru and Adi have a romantic moment with each other where they get out in each other’s eyes. They also have a fun time together when they start singing a song about the moon.

The same night, Raghu and Akhila are delighted that their son Preethu is finally engaged to the girl that he is in love with. Raghu too tells her that they would not have been able to witness his engagement if they hadn’t decided to go to Veeryya’s house.

Veerayya talks to Preethu and Janani telling them that he will make arrangements for the two to get married very soon. While Preethu is extremely happy, Paaru and Adi are also happy that the two have finally come together and are about to get married. They all have a light moment.

Just then, a girl from Adi’s office comes and asks for him. Veerayya is confused as she looks towards Adi and says that there are certain documents that must be signed by him. Adi, however, tells her that she has come to this house by mistake and signals her to leave.

Meanwhile, Akhila and Raghu are getting ready to welcome Janani to their house as she has just gotten engaged to Preethu. They all celebrate the union of the two. Kaamini also taunts Paaru asking her why she is pretending to be Adi’s wife when she is just the house help.

Akhila thanks Paaru for everything that she has done. She also says that Paaru has always been the one to solve the problems of their family and no matter how much she thanks her it will not be enough. Akhila also gives her a chain as an expression of gratitude.