Appaji meets Raghu and Akhila who then reveal that Adi and Preethu are their kids; he is supportive of the two. 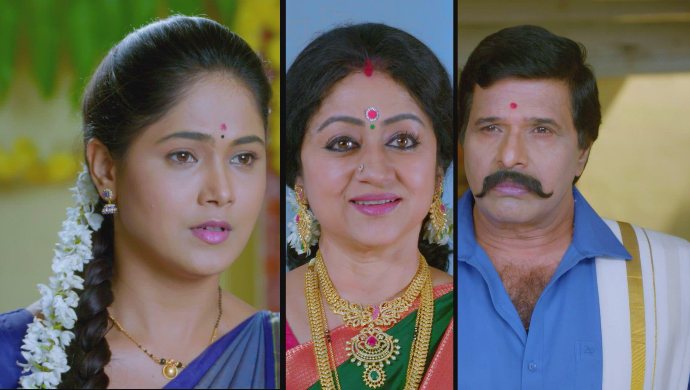 Last week in Paaru, Parmeshwara sees Adi and Paaru being friendly and warm towards his family. He appreciates their behaviour and also blesses both of them to have children soon while Raghu and Akhila are still staying in the village. One of the villagers who visited the temple gives him the prasad from the temple. He also tells him a way in which he can get close to Parmeshwara.

Akhila and Raghu meet Appaji where they tell him the truth about Adi and Preethu. She tells him that they are her kids and have come to their house for a reason. Appaji is taken aback. He asks Akhila why they are dressed up in this manner.

Akhila and Raghu spend time with their family along with Appaji. They tell him the truth about Preethu and Janani and also have a hearty meal during the day.

Just then, Parmeshwara reaches the house. He questions Appaji as to why they have come for a visit. He is furious. But Appaji handles the situation by telling him that he wanted to meet them and he does not need anyone’s permission to do so.

Akhila and Raghu leave for the day. Adi also tells them that if they need anything, they can ask him. They are all relieved that Appaji knows the truth about Preethu and Janani.

Paaru, Adi and Preethu are talking secretly in a corner and decide to be careful about how they behave. They also tell each other that no one else must come to know the truth about them and their relation with Akhila.

Parmeshwara tries to make sense out of everything that is happening around him. He wonders why Akhila came to the village with Raghu after 25 years. He also wants to know how the two are related to Rudrayya. He suspects that something has encouraged them to come back to the village and decides to find out the reason.

There is a ritual being performed in that house that day. Parmeshwara tells Paaru to perform all the rituals as she is the only married woman in the house. He also gives her money as a blessing and tells her to seek blessings from her mother. Paaru immediately thinks of seeking blessings from Akhiladeshwari.

Inspired By The Adventurous Diganth Manchale, Here Are 5 Places To See In Kodaikanal