Parmeshwara overhears Adi and Paaru praising the new boy and says that he's the one who will be marrying Janani. 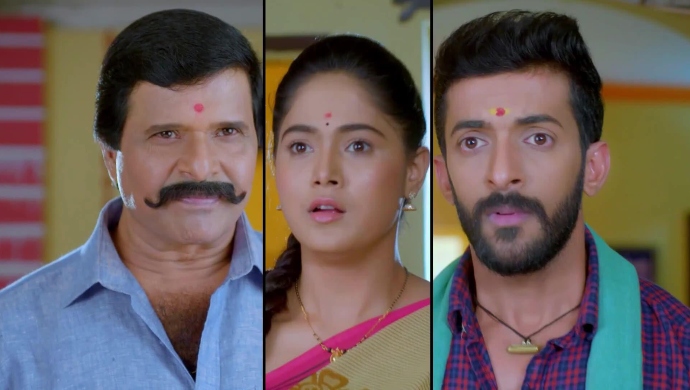 Last week in Paaru, Raghu, and Akhila run into Parmeshwara at the temple. As they are talking about their son’s wedding, Parmeshwara brings up matters of the past and tells them that they have made many mistakes that they will not be forgiven for.

Parmeshwara tells Janani that children must listen to their parents with regard to certain things as they only talk from experience. He also expresses his fear to tell her that he was worried when he realised that she wasn’t at home. However, when Appaji told him that she has gone to the shop, he was relieved.

The two of them share a sentimental moment when he tells her about how important she is to him. Janani is in a fix when she is unable to confess her feelings for Preethu. Parmeshwara asks her if there is anything she would like to tell him but she doesn’t say a word.

Elsewhere, Adi and Paaru are consoling Preethu who is confused about Janani’s wedding. He is thinking of a way in which he can stop her from getting married to someone else but also seems vexed about the same. Adi tells him not to worry.

Appaji, on the other hand, tries to take control of finding a boy for Janani so that he can reject them, and as a result, she can get married to Preethu. But Parmeshwara tells him that he is still alive to take care of his daughter and takes up all the responsibilities of the same.

Adi and Paaru share a romantic moment where they indirectly express their feelings for one another.

Later that day, Adi and Paaru meet a man who enlightens them about farming and its techniques. Impressed with him, the two tell Parmeshwara about him who then reveals that he is the boy that Janani will be marrying. Everyone is shocked.

Akhila and Raghu, on the other hand, are worried about their children. Just then, Adi comes into their house and cries to Akhila.