Daamini feeds Paaru with something spicy which Paaru is unable to handle. She also snatches the chain from Paaru's neck. 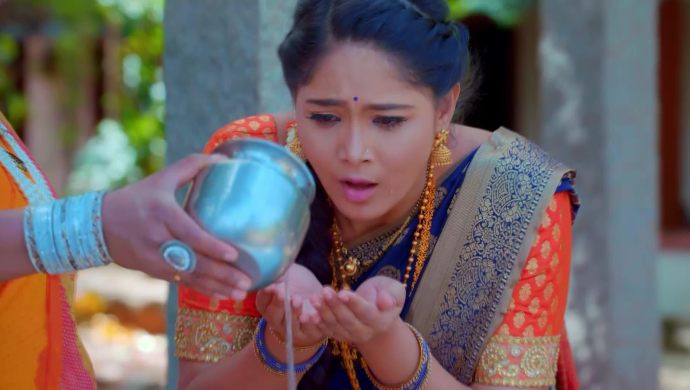 Last week in Paaru,  Raghu and Akhila are delighted that their son Preethu is finally engaged to the girl that he is in love with. Raghu too tells her that they would not have been able to witness his engagement if they hadn’t decided to go to Veeryya’s house. On the other hand, it is discovered that Paaru had spoken to Rahul who was going to marry Janani.

This week, Daamini deliberately mixes something spicy in the God’s offerings so that Paaru chokes on the same. When Paaru eats it, she runs out of the house to spit it out as she cannot handle the spice. Daamini takes advantage of this situation and bad mouths Parvathi for creating a scene in the house.

Later that day, Daamini forcefully pulls the chain off Paaru’s neck telling her that she doesn’t deserve to wear something that costs so much. As the chain was given to Paaru by Akhila, she tries to convince Daamini to give it back to her.

As all of them are gathered in Akhila’s house, Veerayya decides to come to the house in search of Paaru, Adi, Preethu and Janani. Just as they decide to leave, the nuptial chain falls out of Paaru’s hand. Seeing that, Adi picks it up and ties it around her neck.

Appaji tells Paaru that God will always be with her and help her unite with the man she is truly in love with. He also makes a light moment of the same and tells her to give Adi a kiss on his cheek.

That night, Preethu and Appaji spy on Paaru who wonders how to kiss Adi. Preethu tells him that Paaru will never be able to do it as she doesn’t have the courage to do so.

Mother’s Day Spl: These Pics Of Zee Kannada Actors With Their Moms Are…