Paaru Weekly Recap Of 4-10 September 2019: Gani Puts His Life In Danger To Save Akhila

Last week, Anushka figures out that the man posing to be Kindari Jogi is actually Aditya and informs the same to Akhila. She also tries to kill Paaru! 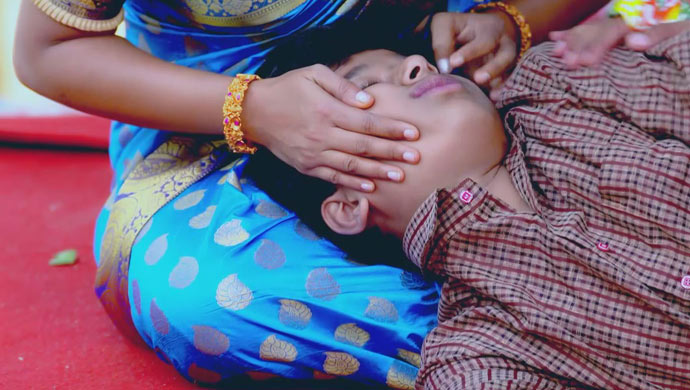 Previously on Paaru, Anushka gives Parvathi an ultimatum to tell Akhila about her marriage with Aditya. While Paaru is asked to keep quiet about it by Aditya, Damini brainwashes Hanumanthu to come out with the truth. The entire family is shaken up when Paaru’s father forces her to say the truth in front of Akhilandeshwari. After learning that her own son hid this fact from her, someone whom she had trusted so much, Akhila breaks all ties with Aditya. Initially, Aditya goes into depression and does something he has never done before on purpose; consume alcohol.

Paaru and Preethu plan to arrange for an interview and secretly call Akhila and Adi to the same location. Akhila, who feels uncomfortable with this, somehow gets through with the interview but still is refuses to talk to her son. Soon, Aditya gets an idea to disguise himself as a man named Kindari Jogi. He makes his way into Akhila’s heart and very few of the house members know his real identity.

1. Kindari Jogi brings home the idol of Lord Ganesha, much to Gani’s annoyance

2. Soon, everyone votes for Parvathi to do the Gowri pooja after Anushka reveals that she doesn’t know how to do it

3. Paaru and Kindari Jogi look at each other awkwardly when Jaya tells Savithri that the former two look like a jodi made for each other

4. Jogi soon starts the celebrations by asking Akhila to perform anything on stage

5. Despite her hesitation, finally, Akhila comes on stage and sings a devotional song and leaves for some other work

6. Anushka, who assumes that Kindari Jogi is another person tries to get Paaru and him to fall for each other

7. However, luck is not on Aditya’s side as Anushka soon finds out that Kindari jogi is actually Aditya himself

8. She makes a plan and informs everything to Akhilandeshwari, who gets furious

9. Upon confrontation, Akhila is once again disheartened that her son could do such a thing

10. She refuses to come for the Ganesh visarjan later much to everyone’s sadness

11. Raghu, Preethu, Aditya and Parvathi go once again to try and convince Akhila to do the last aarthi

12. Anushka in the meanwhile plants a fatal trap for Parvathi, who she knows will be the one to eventually do the pooja

13. As per her plan, Paaru completes the formalities and is just about to pick up the aarthi plate (which is connected to a live wire by Anushka), when Akhila arrives there

14. Much to Anushka’s astonishment, Akhila apologises to God for being rude earlier and decides to do the aarthi

15. Gani comes there just in time after realising what the wire is for and pushes Akhila amma away from the plate

16. When Parvathi slaps his hard for pushing their God, he himself touches the plate to prove himself and gets a severe electrical shock

Will Gani be okay? How is Parvathi going to react at this outrage? Stay tuned to the next week’s update to find out.

Watch your favourite Kannada films here on your ZEE5.

Learn About The Biggest Criminal In North-India During The 90s Through The ZEE5 Original Series Rangbaaz, Available Now On ZEE5

Mokshitha Pai Knows All About Traditional Jewellery. Take A Look!

15 EXCLUSIVE Pics From The Celebrations Of 'Ganeshotsava 2019' On ZEE5