Paaru Weekly Recap Of 24-30 July 2019: Paaru And Aditya’s Getaway Proves To Be Romantic

Last week on Paaru, Aditya saves Parvathi from being embarrassed by Anushka. Also, Paaru gives a superb idea to Aditya to save his business! 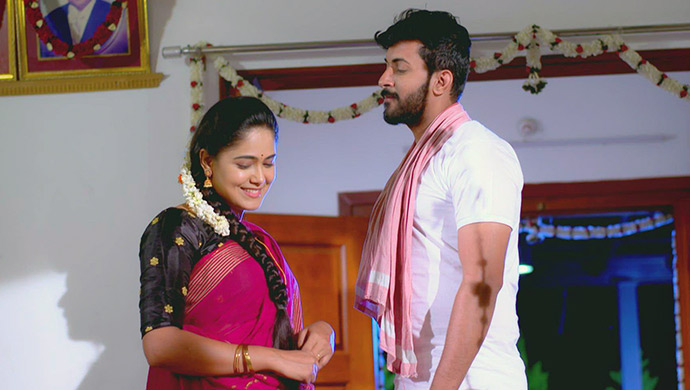 Previously on Paaru, Aditya prevents Parvathi from being sent back to her village after the whole wedding incident. Furthermore, Paaru’s father apologises to her for trying to send her away. The antagonist Anushka, on the other hand, tries to remove Parvathi’s imprint on Aditya’s life by infusing little gifts of her own. For example, she tries to take away the hibiscus flower that Parvathi places every day in Adi’s room in exchange for a framed sketch of him that she made. Unfortunately for her, Aditya doesn’t appreciate such a change in his life. What is more shocking for Anushka is when Aditya introduces her to the logo eyes that have become his only inspiration. While Damini tries to put the blame of stealing food on Parvathi, Akhila and Preethu expose her in front of everyone through the CCTV footage.

Anushka, who hates the logo eyes by now, is in for trouble when she dares to change the eyes to those of her own. Aditya’s anger scares Anushka, who tries reasoning with him that it should be her on the logo, but fails in every attempt. She soon groups up with Damini and finds out that not only did Paaru and Adi get married but the logo eyes are the none other than Parvathi’s. They soon decide to keep another photoshoot for Paaru but ensure that only she, Anushka and Damini remain behind while the rest of the family goes out for one day. However, something irks Aditya to return and he is shocked to see that Anushka is forcing Paaru to wear short clothes, much to her reluctance for the shoot. He slaps her across the face for doing such a thing to someone as nice as Parvathi.

Let’s see what happened next…

1. The angst about the photoshoot sends Parvathi to Akhila’s feet as she seeks some words of courage

2. Akhila then shows Paaru the photos she clicked in the saree to cheer her up

3. Anushka and Paaru are shocked shortly afterwards when Akhila tells Aditya that Parvathi is now his responsibility

4. Later in the day, Aditya gets bad news about the business and stands in wonder just as Parvathi arrives there

5. Upon learning that crops are being sold at higher prices to Aditya, Parvathi immediately suggests that they can do so at a lesser price in her village

6. They take this to Akhila and after giving it a thought for a while, she agrees

7. Not only this, after Raghu suggests to check out some land as soon as possible, Akhila sends Paaru and Aditya for a site visit immediately

8. Damini stands in disbelief to here that Akhila herself is sending Parvathi and Aditya together to her village

9. On their way, Parvathi and Gani show Aditya some places that used hang out in back when they lived in the village

10. Aditya is amazed at the beautiful view and praises it extensively

11. Gani then shows Aditya a game he used to play with his sister

12. The game ends in an awkward moment between Aditya and Paaru

13. An influential man by the name of Rudramani is informed about someone is coming with Parvathi to their village to buy some land

14. To this, Rudramani reacts with rage and tells the guy that no one can come to his village no one can do anything

15. Parvathi and Gani welcome Aditya to their village soon with their typical ‘Halli’ (village) gimmicks

17. When she asks if Akhila knows about this Damini tells her that they went with her permission

18. Parvathi takes Aditya to the house that her father has arranged

19. Soon, Rudramani and his goons come to threaten Aditya

20. Unable to bear the insult to Aditya and Akhila, Paaru slaps Rudramani and asks him to get lost

21. Aditya is shocked at Parvathi’s rebel side and asks her why she did such a thing

22. Later, Gani arranges for a special village drink for Aditya and Paaru, who get drunk and talk sweetly to each other

Will Aditya confess his feelings to Paaru? Watch today’s episode and stay tuned for our next update to find out.

Watch other primetime shows of Zee Kannada, anytime, anywhere, only on your ZEE5.

Kiccha Sudeep's Machismo Persona In The Blockbuster Film Hebbuli, Is Worth Watching More Than Once. Click Here To Start Your Entertainment On ZEE5 Now

Kamali To Bramhagantu: 5 Devastating Secrets That Children Kept From Parents On TV Shows