Paaru Weekly Recap Of 20-26 Nov 2019: Aditya Gets Restless About His Alliance With Anushka

Last week on Paaru, while the trip to the village is successful, Aditya stays confused about whom he loves while Damini finds out a shocking truth. 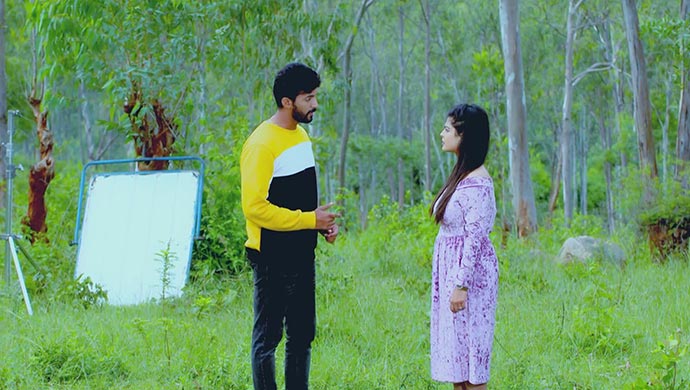 Previously on Paaru, Aditya unknowingly gets jealous when Naanu openly flirts with Parvathi. Using this as the best opportunity, Paaru adds fuel to the fire and makes Adi even more jealous by hanging out with Naanu some more. While Harish tries to tell the truth about the logo eyes to Akhila, Adi and Paaru get lost in the forest near the village.

This allows an opportunity for them to spend time together. However, upon finding no way out, Adi and Paaru have to spend the night together in the forest. Anusha, who tries to contact Adi is furious when he cuts her call. The next day, Akhila is furious when the printer of the wedding cards makes a mistake and writes Paaru’s name instead of Anushka.

Meanwhile, Adi and Paaru make a deal with a film director who was using the forest as a location to help get out of the place if they act together.

1. Paaru and Adi impress the director and do their roles beautifully

2. Just as they are doing a scene, Anushka arrives there and is shocked at what is happening

3. When he tries to explain to Anushka about what was happening, she pretends to be okay with it

4. Paaru watches as Anushka takes away the love of her life

5. Anushka pretends to be puzzled to see Adi and Paaru sitting quietly the whole journey back home

6. Meanwhile, Akhila worries for Aditya and takes Damini’s advice about keeping Paaru and her son away from each other

7. For the same, instead of welcoming Paaru into the house, she asks her to go to her house and bring something of importance

8. Akhila also comforts Anushka that no matter what Adi will marry her and no one else

9. When Paaru brings the parcel and opens it to find Adi and Anushka’s wedding card, she stands stunned

10. Savithri worries for Parvathi, who pretends as nothing happened and continues to make food

11. Elsewhere, Akhila tells Raghu that she worries that Paaru has started to fall for Aditya and vents out her frustration to him

12. Preethu interrogates his elder brother that evening about what is truly in his heart

13. The next day, Anushka and Damini, who plot to finish Paaru, are taken aback when she comes with sweets and congratulates the former on her wedding

14. In his room, Adi confesses to Preethu that he loves the logo eyes when it comes to the real sense of love

15. At a temple when Hanumantha goes to show Paaru’s horoscope to the priest, he is shocked to know that Paaru is already married

What does this mean? Will everyone find out that Paaru still has the thaali in her neck? We’ll find out in the next week’s update.

Planning A Vacation But Don’t Know Where? Let The Holiday Queen Deepika…

Gattimela 27 November 2019 Preview: Amulya In Danger Thanks To Kishan