Paaru Weekly Recap Of 16-22 August 2019: Will Paaru Succeed In Patching Up Akhila And Adi?

Last week, Akhila finds out about the fake-wedding that took place between Aditya and Paaru. You'll be surprised as to who she holds responsible! 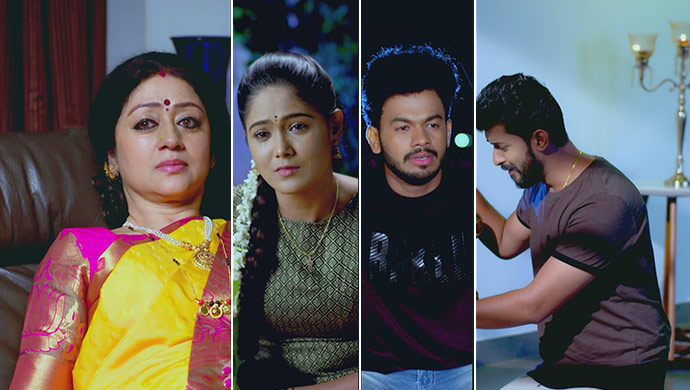 Previously on Paaru, as Anushka’s birthday party begins with a bang, one of her friends constantly harasses Paaru on her command. Aditya, who worriedly looks for Paaru saves her in time just as Anushka’s friend is forcing her to drink alcohol. The matter becomes big when Akhila top supports Aditya for saving a woman who is being forced (whoever it may be). The next day, Anushka is further upset when Aditya and Akhila call Paaru their lucky charm instead of her. So to exact vengeance on Parvathi, during Raksha Bandhana time, Anushka tries to make the former tie a rakhee to Aditya.

However, the situation is saved when Soujanya comes complaining to everyone that her rakhee-money is missing. Damini to tries to put the blame on Gani fails to do so as she finds out it was her husband who took the money. Parvathi and Ganesh celebrate Raksha Bandhana together with a smile and some tears in their eyes. Let’s find out what happened since then…

1. Paaru recollects Anushka’s warning about telling the truth to Anushka and decides that it is the right thing to do

2. Soon, Aditya arrives there and they both talk to each other via the dasavala hoova (Hibiscus flower)

3. Damini watches them from a distance and is shocked when Paaru tells Aditya that she wants to tell Akhila their secret

4. Aditya, who is disbelief about what he just heard, tries to explain to Parvathi about the repercussions of revealing this secret

5. Damini then instigates Hanumantha to make Paaru confess to Akhila about the dummy wedding

6. Reluctantly, Parvathi is then dragged in front of Akhilandeshwari, much to her surprise

7. Hanumantha apologises to Akhila for all their wrong-doings and tells her that it is time to set things right no matter the consequences

8. Finally, the truth about the dummy-wedding is out and everyone including Raghu and Akhila stands stunned

9. A few moments later, Akhila goes into her room and comes back out with a gun pointed towards Paaru

10. Much to everyone’s astonishment, Akhila changes the target and points the gun towards her own son Aditya!

11. She doesn’t shoot him but breaks down in tears at the betrayal her son committed towards the trust she had for him

12. Anushka gets irritated when she sees Akhila not blaming an innocent girl (Paaru) at all

13. At night Preethu apologises to Aditya for the whole ‘dummy-wedding’ as it was actually his idea

14. The next day, Parvathi goes to Akhila to ensure she eats some food

15. Paaru’s guilt soon consumes her when her God, her Akhila Amma asks forgiveness for the injustice that happened

16. Meanwhile, Anushka goes to Aditya to comfort him from his troubles

17. Paaru later excitedly goes to Gani claiming she has an idea to unite Akhila and Adi (by arranging for an interview with the two of them)

18. Elsewhere, Preethu finds Aditya in an intoxicated state and is disheartened to learn that his brother craves Akhila’s love

Will Paaru be successful in this attempt? Stay tuned to the next week’s update to find out.

A Bit Of Romance, Some Comedy And An Old-Age Rivalry Is What The Hit Film Panchatantra Is Made Of. Click Here On ZEE5 To Watch The Film With Your Best Buddies