Akhila is very close to locating Harish, but why are Daamini and Uma so scared? Were they behind Harish's disappearance? Find out here! 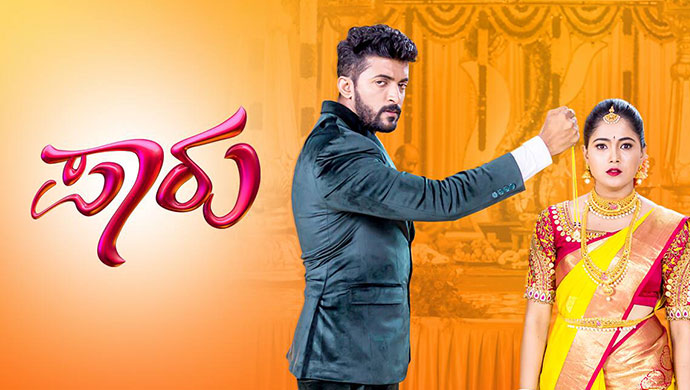 Life hasn’t been all that great for poor Parvathi in the prominent show Paaru on Zee Kannada. Why, do you ask? We’ll tell you. So after she got accidentally married to Aditya for real, a devastated Paaru has been trying to cope with the fact that even though she is head-over-heels with her doddejamanre (Adi), she will be married to Harish soon. Then comes the attack on Akhilandeshwari by a hired contract killer Makrand. Paaru, without getting any sleep or rest, orchestrates a whole plan to save her God Akhila amma. Enter Anushka, the latest antagonist on the show, who hates Parvathi and wants to destroy her without Akhila’s notice.

While Paaru still has no idea about the real intentions of the woman who is supposed to marry Aditya, the day of her wedding arrives. But lo! On his wedding day, Harish realises that Paaru is the same woman whose eyes form the logo of Aditya’s company. As the marriage is progressing, Aditya makes a shocking discovery that Harish has gone missing! Another gut-wrenching moment soon comes into Paaru’s life when she learns that not only did Harish leave her, but her father too wants to die because of this embarrassment. The wedding gets called off but not before Akhilandeshwari promises to bring justice to whoever was at fault.

Let’s see what happened after that in the last week, shall we?

1. Savithri Amma and the others are shocked to see Paaru back to normal.

2. Aditya and Preethu too cannot understand why Paaru is her cheery self again.

3. However, Akhila is the only one who understands Parvathi and asks her to vent out her frustration once and for all.

4. A cheerful Anushka is furious when Daamini shows her why she won’t get any time from Akhila.

5. Paaru, who finally cries inconsolably on Akhila’s lap, is promised that she will get justice.

6. An enraged Anushka then tells Daamini that now Parvathi will pay severely for taking away Akhila’s attention.

7. Soon, Daamini plays her trump card and blames Paaru for Harish’s decision to run away.

9. Daamini then questions Aditya about why he is supporting Paaru so much.

10. When the fight between Adi and Daamini goes overboard, she threatens to show some evidence against Paaru.

12. When Daamini opens up the topic of the dummy wedding, Paaru and Aditya stand shell-shocked.

13. Yes! Akhila is more than furious when Daamini’s proof turns out to be a farce.

14. Akhila goes to her room and returns with a gun, much to everyone’s astonishment.

15. When Aditya, Raghu and Preethu ask her to control her anger. To this, she replies asking them to bring Harish to her in the next three hours.

16. Aditya, who leaves immediately with his brother, calls Akhila soon stating that Harish’s location has been traced.

17. Akhila informs everyone that the culprit will soon be revealed. A hassled Uma accidentally drops a vase in fear after hearing this.

18. In the end, Akhila warns Daamini and Uma that if they had something to do with Harish’s disappearance, they will never see happiness again.

Will Daamini and Uma get caught? What will Aditya find out from Harish? Stay tuned to the next weekly update to find out.