In the last moments of Parvathi’s life, Nanditha and her sister let her escape only to shoot her in the end. Will Parvathi survive the gun shot? 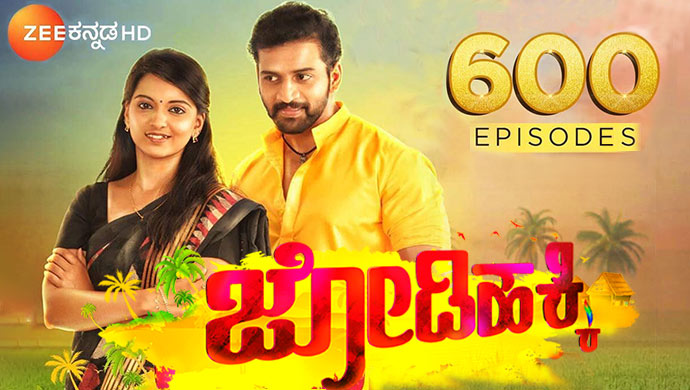 After months of chasing Parvathi, seems like Nanditha and Kadambari have achieved what they set out to do. Zee Kannada’s Jodi Hakki has taken a huge emotional blow on the 600th episode of the show. I’ll explain how but before that, here’s a quick recap of what happened after Rama buys Janaki new books to study. Nanditha, as usual, tried to stop Janaki from going to give the examination but Rama saves her. She is able to give the rest and the result of the exam is fruitful. While Rama then gets a business proposition from Tirupathi, Appanna and Parvathi decide to tell Rama the truth about them. At the same time, Nanditha and Kadambari hatch their final plan to end Parvathi and forcefully kidnap her from her home.

Elsewhere, Appanna tells Rama everything but it’s too late when they realise Parvathi has been kidnapped and rush to look for her. Let’s see what happened after that.

1. Kadambari and her young sister abduct Parvathi and take her to an abandoned area and plan to kill her

2. Nanditha interrupts the goon who has the gun pointing to her and announces that she wants the thrill of killing Parvathi

3. Parvathi pleads to them to let her go, but all in vain

4. Soon, Nanditha gets bored and decides to play a new game by pretending that she is giving Parvathi one last chance to escape

5. Meanwhile, Rama and Appanna along with the boys frantically look for Parvathi

6. At the abandoned location Parvathi makes a run for it believing what Nanditha said

7. Nanditha, however, has no plans of letting her escape and picks up the gun

8. As Parvathi is running, Nanditha takes aim and shoots

9. At the same time, Appanna starts getting extra panicky and asks Rama to drive faster

10. Just then they both find Parvathi running across the road and soon make an alarming discovery

Will Parvathi survive? What will Rama and Janaki do now? Watch the latest episode of Jodi Hakki to find out. Furthermore, to wish the cast and crew of the show all your good wishes for completing 600 episodes, comment below.

Natasaarvabhowma is an exceptional film and also the first time Appu Sir tried a genre like horror-comedy. Click here to watch this film on your ZEE5

Watch The Sudha Murthy Episode On Weekend With Ramesh Season 4 To Know About Her Cute Golden Retriever Gopi, Streaming In HD On ZEE5