Definitely one of the best love-triangle movies of Sandalwood in a long time. Plus, add a touch of paranormal glitter and your blockbuster is ready! 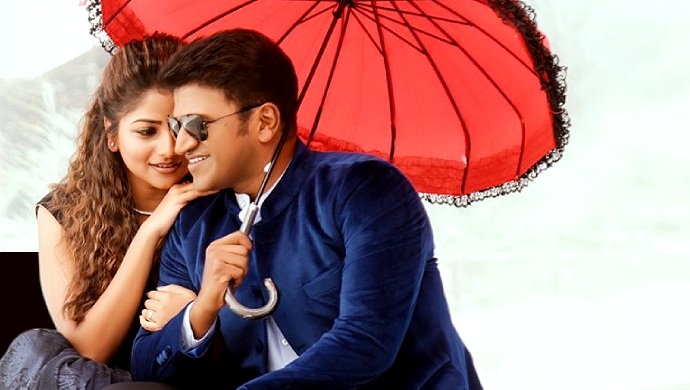 Released early this year, Natasaarvabhowma is a brilliant example that portrays the development of Sandalwood in terms of good concepts for stories. Along with other gems like KGF: Chapter 1, Yajamana and Pailwaan, it won’t be a surprise if Sandalwood soon surpasses its other linguistic counterparts in the south. Starring Namma Appu Sir as a journalist, Gagan Dixit, the story is about his journey to find someone important. From Kolkata to Bengaluru, Gagan comes down to find this person and ends up acquainting himself with the manager of a mobile network company, Sakshi (played by Rachita Ram). However, things take a U-turn when he and his geleya Keshav move into a proclaimed haunted house. Amidst this, a prominent politician, whom Gagan helped, finds himself traumatised between two personalities of the journalist. How all these characters come together to a shocking end, forms the crux of the story.

Directed by Pavan Wadeyar, and produced by the famous actor-producer Rockline Venkatesh, this film sees the Kannada debut of the popular south actress Anupama Parameswaran, who plays the role of Shruthi and has a peculiar role in the film, one that is very close to Gagan. With her journalist attire of spectacles and long hair, the whole look was apt for the part Anupama has played in the film. Apparently, for the shooting of most of the scenes between Anupama and Appu Sir, the crew went to Kolkata to make the story even more authentic and it shows brilliantly. Apart from her, other prominent characters who supported the whole film were, Chikkanna, who plays the crucial role of Keshav (Gagan’s roomie), Sadhu Kokila, who plays the role of Namadev (Gagan’s landlord). The other mention-worthy character is Ghanashyam Yadhav, the Central Minister aka P Ravishankar. While at the beginning of the film it sure seems that Gagan is his saviour, wait till you see the end of the film.

Pavan has played all his cards right with Natasaarvabhowma. He has neatly introduced all the characters including the experienced supporting actor Achyuth Kumar as Yadhav’s Guruji. For those of you who don’t know, his role is very closely shadowed by P Ravishankar’s, and you will enjoy how the director has embedded the two characters with each other. Especially the scary horror scenes and the splendid angles the scenes have been shot will keep you at the edge of your seat for sure. Talking about roping in the lead, this is the first time any director offered such a meaty role to Namma Appu Sir and of course he had to agree because his performance onscreen will leave you positively baffled. Doubtey beda!

Additionally, for Dr Rajkumar fans, as usual, some memorable visual clips of him have been neatly sewed into Natasaarvabhowma.

The music score has been given by D Imman, so there is definitely some interesting tracks you can take a listen to. Crossing 7.4 million views on YouTube is the hit song Yaaro Naanu, starring the Dimple Queen and the Power Star. The famous Bollywood singer Shreya Ghoshal has given her nightingale like voice to Rachita Ram and has aided in making the song look even more magical. Other tracks like Open the bottle, Dance With Appu, Tajaa Samachara and the Title track of Natasaarvabhowma have also secured more than a couple of million views, so imagine what a hit the film with the music will be like.

Your quota of ‘action’ will be satiated from the very first ten minutes of the film, so definitely a power-packed intro of the Power Star. Along with this, the chemistry that the lead-trio has displayed is brilliant. There is Sakshi, who falls in love with Gagan without knowing anything about him, and drifts away into this dreamy sequence (aka the song Yaaro Naanu). Their onscreen chemistry in the song will take you places. Coming to Shruthi and Gagan’s chemistry. Watch this clip below and you’ll know for yourself, what I mean.

All-in-all, these three proved to be a terrific trio to keep the viewers wondering how the love-triangle came about to be.

Another cool thing about this film is the cameo appearance of Padma Shri B Saroja Devi, a yesteryear actress who won many awards in her career for her immense contribution to Sandalwood. In the film, she says one line for Puneeth Rajkumar and I honestly don’t think she said it for his character. “Ninige Natasaarvabhowma antha karibeku (You should be called the ‘Emperor of Actors’)”, she says.

Type in your review about the movie in the space given below or wish the stars of the film more success, the choice is yours.

Watch some of your favourite films, streaming on the ZEE5 Platform, to keep yourself entertained.

Watch Thayige Thakka Maga, If You Are A Fan Of Sumalatha Ambareesh, Streaming On ZEE5

Gattimela 29 May 2019 Written Update Of Full Episode: A Mishap At The Construction Site