After working together for Mungaru Male, Yogaraj Bhat and Ganesh are back to recreate some more magic onscreen and we can't keep calm! 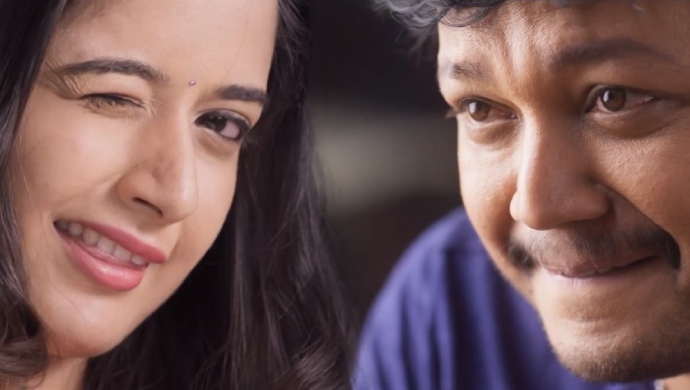 Mugulu Nage is the story of a man named Pulkesh (Ganesh), who is incapable of crying. Almost like a birth defect, Pulkesh ends up laughing every time even when he is sad. To add to his trauma, the four love interests that he swirls around with cupid arrows, eventually break his heart. Writer and director Yogaraj Bhat has brought about a new twist to the kind of love stories he generally makes. Although there is rain along with love, it is nothing like his previous project with the Golden Star, Mungaru Male.

The Golden Star’s Mugulu Nage can be viewed right here:

The biggest question mark, however, is to figure out which love interest Pulkesh ended up with. If you haven’t watched the movie yet, here are seven remarkable reasons why the collaboration of Bhatru and Namma Golden Star resulted in unexpected but greatly deserved success.

While all babies cry when they are born, Pulkesh was born laughing, hysterically. As he grew up, it started becoming a concern for everyone around him.

2. The portrayal of love

Due to various reasons, Ganesh can’t find the love of his life in order to get married. Just as things start getting serious with any of them, he finds himself heart-broken but cannot express it as he can’t cry.

4. Pulkesh’s equation with his mom and sister

Despite his condition, Pulkesh’s mother and sister are always supportive of him. Every time he is in a low phase due to a breakup, they both always seem to be there to coax him. Adorable!

Written by the talented writers Yogaraj Bhat and Jayanth Kaikini, a few songs in the movie are just so scintillating that you would drift into dreamland. Their lyrics, tone, and placement in the movie couldn’t be any better!

6. The journey of a man who overcame his flaws to get married

In the end, Pulkesh is a completely transformed man after battling his deepest flaws. The good part is that he is eventually victorious in this attempt. *sigh of relief*

7. A surprising yet happy ending

The ending will completely surprise you! It is a happy one and that’s all you need to know. The manner in which the movie has been creatively stitched together to form a complete piece can only be possible in the hands of a talented director (like Namma Bhatru).

A family entertainer, Mugulu Nage will give you all the romantic feels and a rollercoaster ride of emotions too.  As for Ganesh’s performance in the movie, his delivery has been great considering he was not allowed to depict any other emotion except laughter.

If you are a fan, give a big shout out to the multi-talented actor Ganesh in the comments space below.

If You Like Indian Superhero Movies, A Flying Jatt Should Be Bookmarked Right Away

Birthday Spl: 7 Movies Of Vijay Raghavendra That You Must See If You Are A Die-Hard Fan