This blockbuster marks the 201st film of Dr Vishnuvardhan and you will love every bit of it. The film stars Ramya and Diganth. 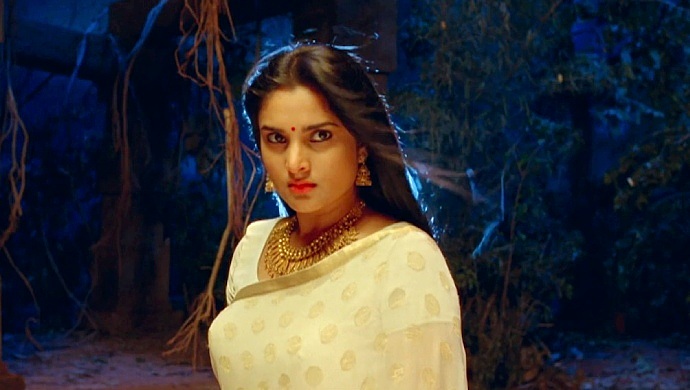 Nagarahavu is a mythological tale that mixes the past and the present. Manasa (played by Ramya) wants to join Nagcharan’s (played by Diganth) music band. However, the latter has no idea about Manasa’s true identity. The show-stopper, however, is the return of Namma Sahasa Simha Dr Vishnuvardhan on the big-screen via CGI experts. If you are into films that go beyond reality, Nagarahavu is the best entertainer for all you fantasy-fiction lovers.

If you are seeking an epic-fantasy film, watch Nagarahavu here:

The Telugu director Kodi Ramakrishna, who marked his Kannada debut with Nagarahavu, has mainly concentrated on the fictional and mythological aspects of the film. The beginning is nothing short of the makings of an international film. The narrative, as well as the graphics, made me re-watch a lot of scenes.

The backstory of the film is that in the past, all Gods stored their powers in a sacred urn, to protect them from evil. The powers from this could be retrieved only on the day of a solar eclipse. This is when Ramya’s character Manasa, comes to play. She is the protector of the urn and is also a snake, who can turn into a human at will.

When asked why he chose Ramya for this role, the director told a leading daily, “The film offers a very powerful character for the heroine. It is a very emotionally taxing role and the heroine needs to be someone who can draw audience to the cinema halls. I chose Ramya because of her following, apart from her being a good performer”. While her snake character is bang on, there is also a magical garden with neon flowers to cement the fantasy aspect of the film.

My favourite part of Nagarhavu, however, is the climax. Fans of the legend Dr Vishnuvardhan have a real treat waiting for them in the last 15-20 minutes. While there are small nuances in the film, they are completely ignorable. This also makes for a great film to watch with your family as there is some entertainment for every age group.

What about mythological films do you like the most? Did Dr Vishnuvardhan’s return make you emotional? Write your comments in the space below with #sahasasimha #drvishnuvardhan

Are You A Rajkumar Rao Fan? Schedule His Thriller Film Trapped To Watch Tonight After Dinner