Trishul is sent to Shivani's house by Trivikrama's father to keep an eye on her. However, Trishul also ends up confessing his love to her. 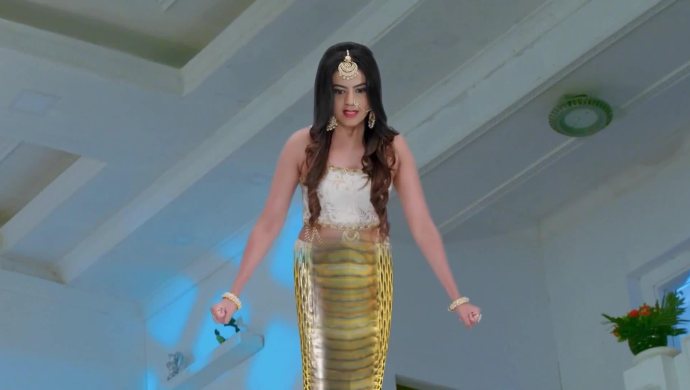 In the previous episode of Naagini 2, we saw that fourteen years have passed since Shivani was captured by the snake charmer. Trishul and Trivikrama have grown up too, while the Guruji who helped Shivani, is trying to bring her back from where she had been unconscious for years. After performing certain rituals, Shivani regains consciousness and immediately goes in search of Trishul and Trivikrama.

In last week’s episode, Trishul discovers that Shivani, whom he had met the previous night, happens to be his neighbour. However, as she is dressed up differently, he doubts if she is the same girl that he met.

Trivikrama’s father, on the other hand, tells everyone in the house that no new girl must be entertained into their house as there are chances that she is a female serpent who is trying to get back the naagamani that they have protected for all these years. He also suspects that the girl who lives opposite their house is a snake serpent.

Later that day, Trishul comes into Shivani’s house to talk to her. She tells him that she has no intention of becoming friends with him and asks him to leave her alone. Her friend also tells him that Shivani rests at the time and mustn’t be disturbed. Shivani, on the other hand, tells her friend that there is something suspicious about Trishul. She says that he has begun to develop feelings for her for which she must stay away from him in order to avoid more confusion.

Later, Trishul comes back to meet Shivani. However, this time, he asks her other guards about Shivani’s whereabouts. He also asks them if she is from a village and speaks the local language or if she is from a foreign country and speaks only English. The two of them do not answer any of his questions. Nevertheless, he asks more questions regarding her background. The bodyguards are called and Trishul is thrown out of the house.

Inside the house, Shivani and her friends are looking at a map that not only tells them how to trace the naagamani but also has all the information pertaining to the naagaloka, its functioning, and solutions to every problem that could occur.

Meanwhile, Trishul figures out a way to come into Shivani’s house. He inspects the house to see if he finds any proof or identity with regard to Shivani. However, Shivani comes into the house. Infuriated with him, she tells the guards to send him out of the house.

Trishul is assigned the job of keeping an eye on Shivani and the members of the house. He also apologises to her. Trivikrama’s father also tells his personal assistant that he dreamt of Shivani and doubts that the girl living next to their house is actually the naagini.

#FashionFriday: 8 Sarees Of Akhilandeshwari From Paaru That Will Blow Your Mind