Muttu To Swathi: Have You Met The ‘Belli-Squad’ From The Show Yaare Nee Mohini Yet?

Protecting poor innocent Belli from Maya and Ashoka’s wrath are Muttu and Swathi obviously. Check out the three other supporters of Belli on the show. 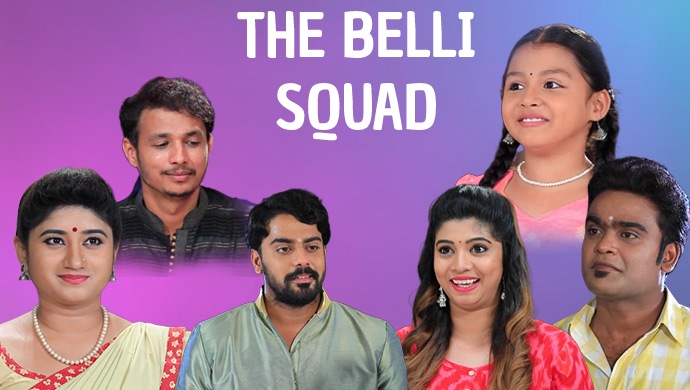 For over 500 episodes, Yaare Nee Mohini has kept fans hooked to the show. Sushma Shekhar, Chethan Vicky and Aishwarya Baspure star in the lead roles as Belli, Muttu and Maya respectively. Another prominent character of the show is that of Bharati Hegde, who plays the role of Muttu’s deceased wife Chitra. So digging into the past, Chitra was murdered by Muttu’s aunt but comes back to haunt her and her niece Maya, who now has her eyes on Muttu and his property. Enter Belli, Muttu’s poor aunt’s daughter, for whom he is nothing less than God.

Devoting her heart and soul to Muttu, Belli does everything he asks and has taken extra care to ensure his happiness. However, Maya, the lead antagonist of the show, has been plotting to eliminate the last factor between her and Muttu; Belli. Just as she thinks life is awesome, a huge truth from Muttu’s past comes back. It is none other than his and Chitra’s kid Swathi. She just loves her chikkamma Belli and would do anything to see her with Muttu. She is also a major source of confidence for Belli, who is too innocent to understand Maya’s intentions.

Now comes the interesting part. If you have noticed, Belli now has her squad in place. No! It’s not what you think it is, she hasn’t formed this group, they themselves have fallen in love with her pious nature. You know two of them already by now I am sure, Swathi and Muttu himself. Let’s not check out all the members of the ‘Belli-Squad’ shall we?

3. An adorable selfie of Belli and her Shanmugha anna

4. And the final member of the ‘Belli-squad’ Aishwarya, Muttu’s other cousin

5. Swathi and her Chikkamma dance to the perfect retro song

In between the shoot😂🙈 with this cutieeeee❤️😍#oldisgold

The show Yaare Nee Mohini has finally reached the point where Muttu has accepted Belli as his Hendthi, in front of Ashoka. And most importantly, he means it this time. To catch their romantic sessions, you will have to stream the latest episodes.

Give a shout out to these actors, all of whom have done a fabulous job, in the space provided below.

Watch all the episodes of the hit ZEE5 Original Series Rangbaaz, here.

If You Want To Know The Truth About Sunny Leone’s Life, Watch The ZEE5 Original Series Karenjit Kaur: The Untold Story Of Sunny Leone, Only On The ZEE5 Platform