Ever thought of practicing Acroyoga? Here are the benefits you will experience if you start this new form of yoga! 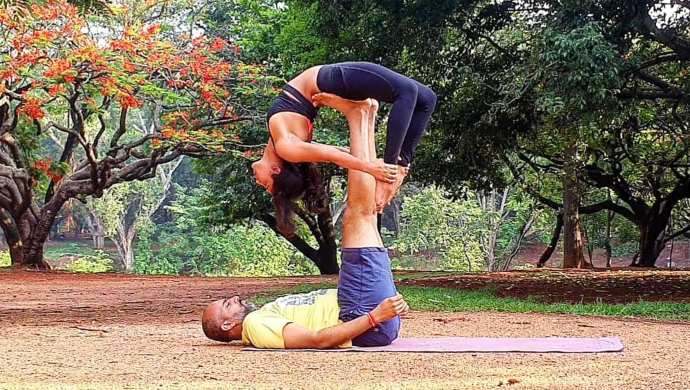 Samyuktha Hegde, who made her debut in Kirik Party, has acted in Telugu, Kannada as well as Tamil films within a down of just three years. The pretty actress is a die-hard fan of yoga and is known for her insane ability to do splits and headstands. Apart from this, she has also performed acroyoga and recommends it highly.

For those who are a little lost, acroyoga is a combination of acrobatics, yoga and healing practices, too. The actress who put up a picture of her practicing the form also said that she has been following Acroyoga and actually practicing it has helped her learn much more about her body.

Acroyoga helps in developing your body in terms agility, strength, flexibility and endurance

Apart from the serious benefits, Acroyoga is totally fun as it is always practiced in pairs or groups and can be done with friends, family and in the form of games, too!

It makes us aware of our body and helps us recognize our body image along with its multiple motor qualities, such as coordination and control of movement.

It is that practicing this form of yoga decreases anxiety and also takes one to a state of shared energy also clear your mind of tensions living the present.