It is VOTING time! While semi-finals of SRGMP Li'l Champs 2019 was a treat to watch, here are the 6 out of 13 contestants who made it to the Finale! 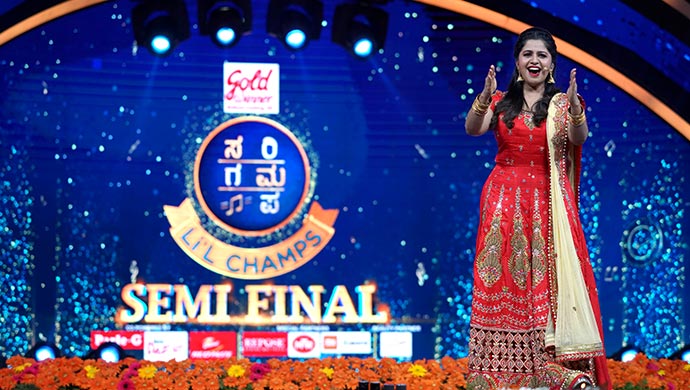 From 19 puttanigalus that were selected in the mega-auditions of Sa Re Ga Ma Pa Li’l Champs Season 16 to the remaining 13, the Zee Kannada show has come a long way, don’t you think? With many months of entertainment from the prettiest hostess Anushree and the puttanigalus, it’s no wonder that fans have only increased since the beginning. The judges’ panel of Arjun Janya, Vijay Prakash and Rajesh Krishnan will be giving their final verdict this weekend on the Grand Finale and the excitement is just building up.

But before that, let’s see what happened in the semi-final round shall we? Find out about the final set of contestants that will compete this week in the finals, here.

Playing to her strengths, Monamma sang the Uttarakarnataka Janapada (Folk) song, Duddu Kottare and the results were amazing. Even though she didn’t get the golden buzzer, the Grand Jury gave her an average of 92/100.

The song meant for ideal an husband-wife, Naav Maneg Hogodilla from the film Victory 2, was sung by the littlest human of the show, Gnana. Her performance was so cute that the judges stopped judging! You know the end the result; a golden buzzer.

From the film Kavacha, Sangeetha sang the melodious SP Balasubramaniam song Rekkeya Kudure Eri and did a fab job. Falling just short of full marks, the Grand Jury awarded her a whopping 98/100 for the soulful lullaby.

With such brilliant levels of voice control, my gut feeling says that Omkar will be a finalist after watching a glimpse of his performance (above). Last week, Omkar sang a power-packed devotional song on Lord Shiva and everyone in the audience was floored, the judges, Mahaguru, Grand Jury included. Also, the young lad became emotional when the Mahaguru gave him a golden buzzer.

Singing a Dr Rajkumar song, Yaave Kaviyu Bareyalara from the hit film Bhagyada Lakshmi Baramma, was Sunadh M Prasad. His wonderful performance got his praises from everyone and Mahaguru proudly granted him the golden buzzer. Not only this, Sunadh’s father wrote a heart-warming poem for the whole Sa Re Ga Ma Pa Li’l Champs Season 16 show, the host, the judges, the mahaguru and the audience too as a tribute.

Shreyas also was given an SP Balasubramaniam song, Tharikere Erimele from the film, Devara Duddu. With the relevant voice modulation, Shreyas gave a semi-final-worthy performance. Mahaguru had no option to give golden buzzer for his act.

Little Aprameya did a fantastic job performing on the song Aha Chatura Naari from the Raghavendra Rajkumar film Pakkada Mane Hudgi. Very few children are able to modulate their voice at such a young and Aprameya is definitely in the top five of that list. The golden buzzer was his prize for performing so well.

A hemmeya (proud) Kannadiga, Bhargav Bharadhwaj, proudly performed on the song Karnatakada Itihasadalli from the film Krishna Rukmini. However, according to Mahaguru, the choice of song was wrong for a semi-finals episode, so Bhargav ended up getting 90.6/100 from the jury for his act.

The yuvarani of Egypt sang the peppy number Munde Banni Innu Munde Banni from the Kamal Haasan film Benkiyalli Aralida Hoovu. Mahaguru Nadabramha Hamsalekha was so fascinated by Parnika that along with the golden buzzer, he directly got her into the Grand Finale! Isn’t that super-awesome? Thanks to Anushree’s request, the Hamsalekha sir okayed Gnana’s entry to the Finale too.

The intense song Hrudaya Samudra Kalaki from the yester-year film Ashwamedha was brought back with zeal by Abhisyanth, the Kichcha Sudeep of Sa Re Ga Ma Pa Li’l Champs Season 16. While his feedback comments were positive, it was the Grand Jury who gave him an average of 94/100.

Yaaro Kannalli (sung by Rajesh Krishnan) from the film Orata I Love You was Rohan’s song in the semi-finals round. Vijay Prakash, Arjun Janya and Rajesh Krishnan gave Rohan a lot of constructive feedback. Further, Mahaguru complemented the young lad on his entertainment skills and asked the Grand Jury to award him the marks. However, in the end, with the help of Gnana, Hamsalekha sir himself gave the rasagulla of the show the golden buzzer.

Dressed exactly like the Crazy Star V Ravichandran in the song Sundari Sundari Sura Sundari from the film Shree Ramachandra, Gurukiran’s performance was a blast! Already a member of the Grand Finale, GK’s act was loved by all. Mahaguru’s golden buzzer soon followed.

From the 1963 film Saaku Magalu, Sakshi chose the melodious P Leela song, Baa Bega Manamohana. After giving some constructive criticism to the young lass, Hamsalekha sir first asked the Grand Jury to give her marks followed by the golden buzzer.

Golden performance of the week – Shreyas

Dazzling performer of the week – Sakshi

Best singer of the week – Monamma

Best performer of the day – Omkar

Best singer of the week – Sunadh

Grand Finale Contestants: While all the puttanigalus gave their best performances, only

To vote for your favourite candidate, take a look at this clip:

Give a big shout out to the final contestants in the comments box given below.

Watch more of your favourite Kannada entertainment, here on the ZEE5 platform.

For A Recap Of All The Episodes Of Weekend With Ramesh Season 4, Click Here On Your ZEE5 Platform And Watch For FREE!