Learn about how Nagarapanchami was celebrated on the hit Zee Kannada show Naagini, as well as get to know the significance of the festival. 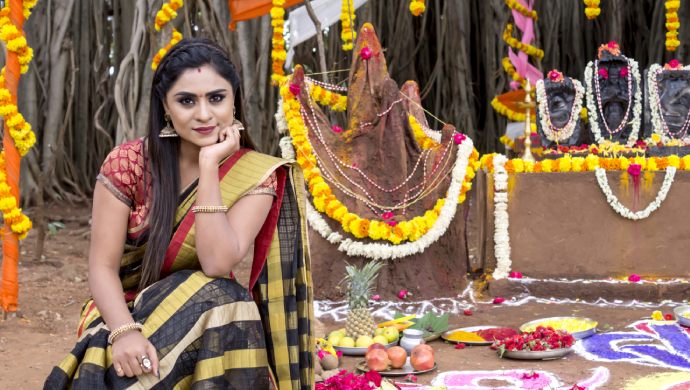 For those of you who weren’t aware of the significance behind today, Nagarapanchami is one of the most celebrated festivals in Karnataka and many other parts of the county. On 5th August every year, snakes and serpents are worshipped with offerings of milk along with other fruits that are provided to them. Nagarapanchami or Nag Panchami as many people call it is derived from the word ‘Nag’ which literally means a snake and ‘Panchami’, which signifies the fifth day (in the Shravana month). Considered as an auspicious day, all Kannadigas get enthusiastic about celebrating this festival and the preparations ideally start four or five days before. When the day finally arrives, many idols of snake Gods along with self-made clay idols are placed and worshipped with milk, fruits and flowers in an attempt to please them. Zee Kannada‘s Naagini show also celebrated the day in today and tomorrow’s episodes respectively.

So let’s see what happened in the Nagarapanchami episode today, shall we?

1. On the show, Amrutha was seen visiting Nagaraja himself to ask him for help in getting her husband back.

2. Since it was Nagarapanchami, the Nagaraja decides to help

3. Amrutha thanks Nagaraja and is able to escape from the place she is held captive by turning into a snake

4. Meanwhile, much to Vaishnavi’s relief, Amrutha comes back home on this auspicious day

5. At home, Hema and the rest of the family prepare to go to the place where the Naga pooja has to be performed tomorrow

6. However, Vishnu reminds his mother and wife that they cannot take Arjun, as he is a Nagayodha

7. The next day, Amrutha goes with Vaishnavi and her family to perform the Naga Pooja and it is a success

9. Vaishnavi’s mother is soon shocked to see a snake turning back into Amrutha

10. Vishnu and Rudra make a plan to put Arjun into a deep sleep so as to avoid him from coming to the place of pooja

11. At the place of pooja, they soon begin the rituals

What will happen on this auspicious day? Will Amrutha be able to unite with Arjun? Stay tuned to tomorrow’s Nagarapanchami episode to find out.

Watch The Latest Episodes Of Subbalakshmi Samsara, Streaming For Free On Your ZEE5 Platform

Sa Re Ga Ma Pa Li'l Champs 2019 Quarter-Finals Round Has Finally Dawned Upon Us: A Recap