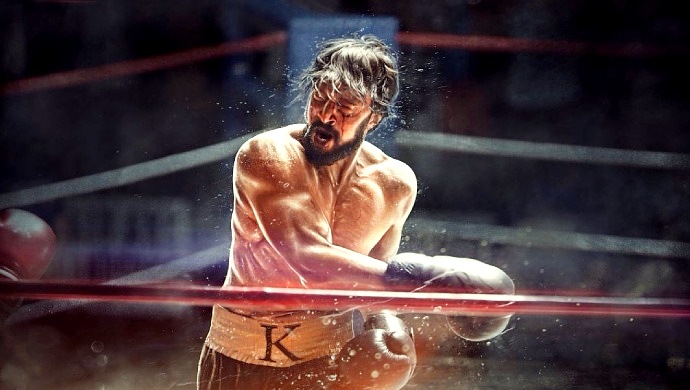 Slated to release in early-August this year, the S Krishna directorial Pailwaan has gained a lot of hype with only the promotional material of the film, so we can only wonder what will happen when the film actually releases. The cast picked for this film are an intriguing set of assorted artists. Namma Kiccha Sudeep leads this bandwagon followed by Bollywood’s one and only Anna, Suniel Shetty, who will be making his Sandalwood debut with Pailwaan. Other prominent names include the dashing Kabir Singh Duhan, who made his Kannada debut with Kiccha’s Hebbuli in 2017, will get the opportunity to work with him again in Pailwaan. Then there are two other debutants in this film from Bollywood, Tele-actress Akanksha Singh and Lipstick Under My Burkha Actor Sushant Singh.

With such a talented bunch, what an epic the film Pailwaan is going to turn out, we can’t wait to see. Today, though, we will look at the pains and sweat Namma Kiccha have to morph himself completely into the role of a wrestler. In an interview with a leading media portal, the Director was able to give all fans some insight into how difficult Kiccha’s journey was. “We had him working from 7 am to 6 pm for nearly a month, along with a lot of preparations at a gym. Everyone knows Sudeep Sir has never visited the gym as regularly in his career prior to this,” the director said.

He further added, “For The boxing episodes, Sudeep had to stay in character for nearly 25 days. The actor, who was trained to be a boxer, had to maintain that perfection throughout the day. Inside the ring, he needed to portray accuracy in the shot, with a lot of intensity and also go along with the story. So a lot of things were involved in this particular character.”

Success has never defined me, Failure has never scared me.
Cinema is a beautiful platform of creativity n entertainment,where I have met Wondeful people n also made few good frnzz.
By the end of today,,wanna thank those frnzz n colleagues for making this day special 🤗🙏#PAILWAAN pic.twitter.com/2WRrIbXQGm

Kiccha’s role demanded that he step out of his comfort zone and push further. Since the schedule was extremely tight, Kiccha was often bruised or have sore shoulders or even cuts. According to Krishna, this was also because ‘swinging arms and boxing’ is generally not part of anyone’s regular activity. Talking about the veteran actor himself, Kiccha too spoke about this role. He said, “I fear nothing…I will fear nothing. Success has never defined me, failure has never scared me. Cinema is a beautiful platform for creativity and entertainment, where I have met wonderful people and also made a few good friends. I shall continue to entertain as long as I can entertain. To all those who believe me and to all those who believe in me, many thanks, hugs and cheers for inspiring me.”

Now, for the best part, this Kiccha Sudeep starrer will be released in 4 other languages: Tamil, Telugu, Malayalam and Hindi, which means we get to see this superstar in four other languages. For poster release of the film that took place on 4th June 2019, one representative from each of the languages was present. Starting with Suniel Shetty, who released the Hindi poster of Pailwaan followed by Mega Star Chiranjeevi for Telugu, Mohan Lal for Malayalam and Vijay Sethupathi for Tamil. Pailwaan is an action-drama film, that looks at ‘how a person approaches an opportunity differs depending on their age’.

Another star in Sandalwood is trending on social media; the famous actor Dolly Dhananjaya, who won the hearts of fans with his role Dolly in the film Tagaru. This is his second venture with Duniya Vijay and fans are going crazy over Dhananjaya’s insta. Check out the new look he will be sporting in the upcoming film, here.

Here is the first look from my next film, a Suri directorial #popcornmonkeytiger🍿🐒🐯 #pmt . Produced by Sudhir, studio18 productions:)

He is apparently said to be sporting this bald-repulsive look, with a ‘Monkey’ tattoo on his forehead. This comes right after the positive feedback from his previous venture as an antagonist in Tagaru (as Dolly). Director Suri, who also worked with Duniya Vijay and Dolly Dhananjaya before (Tagaru), will be seen creating some good entertainment on-screen. When asked about his bald look, Dhananjaya told a leading media daily, “Going bald in no big deal for me if the script is going to fetch me something. When Suri had narrated the script, he had mentioned the requirement.” He further added, “This portion that has me bald is one of the major highlights of the film and a turning point. It has shaped up well and this is a film I am very excited about.”

Who else is excited to this hit film? Send in your best wishes to the cast and crew in the space given below.

Watch the latest episodes of the hit show Gattimela, only on your ZEE5.