His powerful baddie side has made me a true fan. Don't miss #1 and #4. 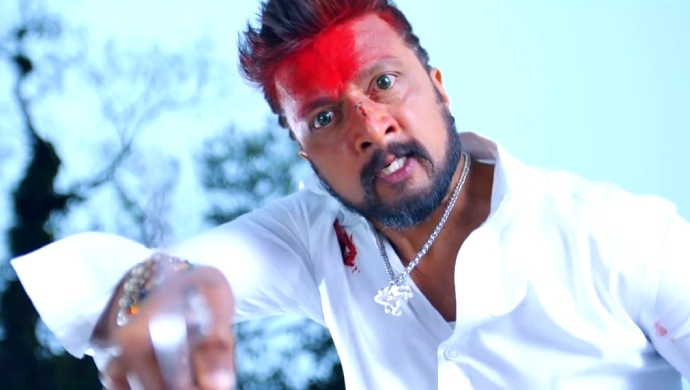 An action-packed film with the perfect star cast is what director Prem had envisioned while conceptualising his film, The Villain. For the first time in Kannada cinema, he managed to bring two legends, Kiccha Sudeep and the Hat-Trick Star Shivanna, on one screen. Even though these two heroes share not more than 15 minutes onscreen together, the build-up until that point is worth the watch.

If we are talking about the show-stopper in The Villain, it was definitely Sudeep’s baddie side. Why? Because of the essence of a wily villain he brought in his performance. From his costume to accessories to the overall persona, his look was refreshing for the viewers. What made him look all the more villain-like were his action sequences. A fair warning, in many scenes there may not be dishoom dishoom because just his entrance scares the bejeezuz out of his opponents. Without further ado, let’s get into the intimidating side of the notorious half of the criminal duo; Kaiser Ram.

When a set of police force led by ACP Bramhavar (Mithun Chakravarthy) tries to pin him down,

Ram retaliates with a big bang.

All his entries are peculiarly scary, especially when he recites the famous Kannada poem, ‘Aane Banthondu Aane, Yaav Oor Aane….’. This makes his entry even more spooky. What follows after this is like a full and final settlement to Ram’s prospective capturers.

2. Confession of his dark secrets

Ram eventually confides in Sita as to who he is, but just as he is about to marry her, trouble lurks from the corner.

Obviously, the goons are no match for the most-wanted criminal Ram, part of the gangster duo Kaiser Ram.

3. Skip ahead to a cooler version of Ram

Ram learns that his confidante Alex (played by Tilak Shekhar) is in trouble, he goes to rescue him without hesitation.

There is a terrific car chase

Sharing some quality time onscreen, Ram (Kiccha) comes for his revenge against Ramu (Shivanna), who has been captured by Kaiser’s men.

Again, the ‘aane banthondu aane’ poem eerily lurks on the lips of Ram, causing Kaiser to meet his imminent death. While the ending is a little emotional, this action-sequence will make your jaw drop!

Hope you enjoyed these action scenes of Namma Kiccha from the movie. If you still haven’t watched The Villain, don’t waste a second more. We will also come out with Shivanna’s action sequences shortly.

Which was your favourite scene of Kiccha? Keep the comments flowing in the space given below.

You can now stream other Shivanna films, on ZEE5! Don’t wait!

The ZEE5 Originals Tamashree Speaks About The Love Between A Woman And A Tomato. Watch It In Kannada Now