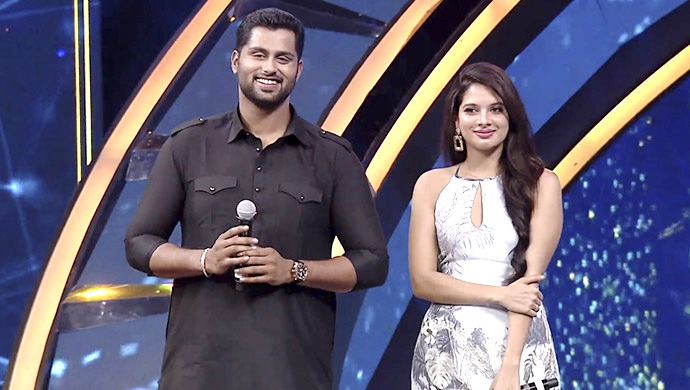 Technically, the Young Rebel Star had made his debut in the 1995 Ambareesh Starrer Operation Antha, as a presenter. However, since that was uncredited to the Young Rebel Star, it’s time for his first real debut in Sandalwood, with the film Amar. If you saw this past weekend’s episode of Sa Re Ga Ma Pa Li’l Champs you would have seen Abishek Ambareesh who paid a visit to the sets to promote his film, Amar. His mother Sumalatha Ambareesh had lovely words to say for her son while recollecting her dear husband’s memories. As for Abishek, who always had an interest in the film industry, marked this debut with the killer line, ‘Naan Hero Ne’. On his release today, many celebrities from the Sandalwood industry showered their blessings to the young star on Twitter and it sure became a rage in no time.

Check out some of the tweets for this budding star, the son of the late Rebel Star Ambareesh.

My best wshs Abhi.
Films hasn't been new to u.,,yet the 1st step matters n I'm sure u have given ur best n that Wil fetch u rewards. U have the blessings frm a great soul watching u from above.
Rise n Shine #Amar. 🤗🥂@sumalathaA@SandeshMysore7

@PuneethRajkumar ♥️♥️♥️
You are the torch-bearer of the greatest legend of the Kannada screen , #DrRajkumar & these wishes mean a lot to me , #AbhishekAmbareesh & team of #Amar ♥️♥️♥️ pic.twitter.com/yuecm5tzg2

#AbishekAmbareesh #Amar
The thrill of 1st day 1st show at #NartakiTheatre #Majestic Bangalore is unparalled !!This is the same historic place where legends have been created , same place where#Ambareesh's100thmovie#HongkongnalliAgentAmar ran for 100 days !! 🤩🤩🤩 pic.twitter.com/OQhxl2sgNc

With so much of love and luck, there is no way that the film will be anything less than a super-hit. If you are a fan of the Young Rebel Star Abishek Ambareesh, go watch his movie Amar, also starring Tanya, and let us know what you thought about it in the space provided below.

For more entertainment on ZEE5, all you have to do is click here.

Mahadevi 24-30 May 2019 Weekly Recap: Trouble Is Brewing For Katyayani At Her Wedding