Kiccha Sudeep On Pailwaan: All Along, I Thought That I Was Fit Enough, Until…

For Kiccha, the role of a wrestler wasn't an easy feat, but he overcame his fears with some inspiration from his co-stars! Follow his journey here! 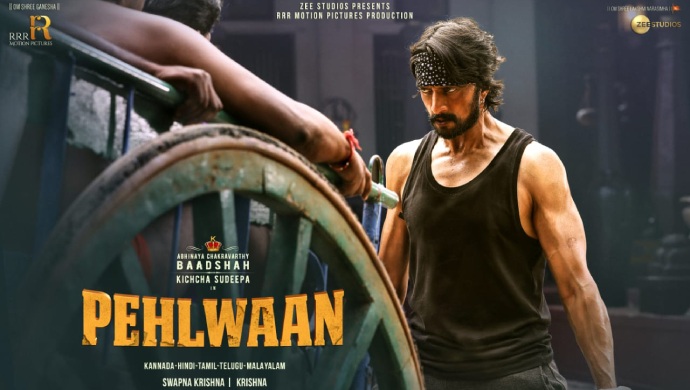 The S Krishna directorial Pailwaan, starring Namma Kiccha Sudeep is about a wrestler/boxer’s journey of life. It is rumoured to be releasing in early-August this year, so cancel all your fans because you will see Kiccha in a new ripped look this time. Other members of the cast include Bollywood’s Anna aka Suniel Shetty, whose Kannada debut will be in the form of Pailwaan, the dashing Kabir Singh Duhan, whom you must have seen in his Kannada debut in Sudeep’s Hebbuli in 2017 and the two debutants from Bollywood, TV star Akanksha Singh and the famous supporting actor Sushant Singh.

Today, however, we will be looking at what inspired Kiccha to successfully morph himself into the role of wrestler/boxer. Now, you all know that wrestling is a profession where you face a lot of abuse, have to do a lot of hard work to keep yourself maintained and most importantly, stay determined to whatever your goal is. For Namma Kiccha too, same was the case. In an interview with a leading daily, he revealed how he mustered the courage to forget everything and look optimistically at the path ahead when he realised that he actually may not be as fit he thought he was for the role in Pailwaan.

“All along, I thought that I was fit enough, until I saw pictures of Kabir (Duhan Singh). He is really well built and I knew that I had to work on my body if I were to be shirtless in scenes featuring the two of us. I have never really been a fan of working out at the gym, but this film required just that and it has paved way for a beautiful change in my life. I have a certain discipline now and follow a routine,” the Baadshah of Sandalwood said. He continued by mentioning that a lot of effort and even more will power were the two pillars of achieving such a physique. For the role, Sudeep also had to shed approximately 20 kilograms to fit well into the character.

Additionally, after shedding so much of weight, he then had to start training to develop the correct built for a wrestler. And since the actor had never needed to do rehearsals for the stunts it was difficult for him on the sets initially. “This film is also, perhaps, the first for which I had rehearsals for action sequences. Earlier, I would just come to set and do what the stunt master wanted from me. But with Pailwaan, we needed to be technically sound in every frame, so we had 4-5 days of rehearsals before every scene. I had a lot more to do than say in Pailwaan and I believe I have done my bit,” the Hebbuli actor said.

When asked if he would do this all over again, the actor was humble enough to say ‘no’ even though he would miss the whole process. He also added that if the director would give this movie a sequel, he would be comfortable in a coach’s role as long as the film was centred around him.

Give a big shout out to this veteran actor if you are a fan, in the comments box given below.

Watch your favourite Kannada movies, here on the ZEE5 platform.

Keep The Kiccha Entertainment Going By Watch His Blockbuster Film Hebbuli, Streaming In HD On Your ZEE5 Platform