Last week took an unusual turn of events on the hit show. Annapoorna asked Kamali to join her business while Tara still continues to hate Kamali! 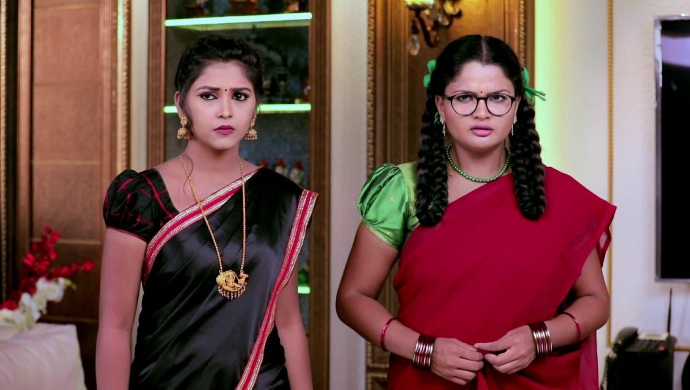 Previously, Rishi, who was missing for two days figured out that Anika was his kidnapper. Despite her frustrating attempts to get him to like her, she fails in removing Kamali from out of Rishi’s mind. Kamali, on the other hand, gets constant insults from Tara, who accuses her of Rishi’s disappearance and says extremely mean things to her. She then promises Tara that no matter what she will find her son and bring him home. A slight gut feeling then tells Kamali that Anika could be the culprit here. She follows Anika and is shocked to find an unconscious Rishi lying on a mountain top. Furious, Kamali then lashes out at Anika and takes Rishi to the hospital to get treated for his injured arm.

With me so far? Let’s see the incidents that led Kamali to probably make the biggest mistake of her life by interfering in the Mahajan-Nanda business relationship. Keep scrolling…

1. Rishi thanks Kamali for her help, but she claims that it was nothing

2. After Rishi is taken to his room, Kamali reminds Tara that she fulfilled her promise and got Rishi back home, much to the latter’s dislike.

3. At home, Annapoorna praises Kamali for saving Rishi and bringing him back home safely

4. Anika, who sees Annapoorna pampering Kamali, gets extremely jealous and decides to do something about it

5. The next day, when Annapoorna asks Kamali to accompany Chandru to the factory, Kamini gets furious

6. With no way to stop Kamali, Kamini then suggests that Anika too must join her sister in the business

7. At the factory, the Mahajan family is shocked to hear that the workers are protesting. Taking Kamini’s advice, Anika speaks demeaningly at them, assuming that this way the situation will calm down.

8. Her plan, however, fails and the workers get even more agitated

9. To calm the situation, Kamali intervenes and accepts their demands without consulting anyone. Rohit Mahajan gets furious while Chandru is shocked!

10. At home, just as Annapoorna is questioning Kamali to confess why she took such a hasty decision, Tara barges in and insults her further

11. Annapoorna and Rishi try to support Kamali but in vain, Tara demands that Chandru go to the factory and fix this mess by tomorrow

12. Rishi, however, takes Kamali to the place where the factory workers live to try and discuss a solution for this problem, but looking at their way of life, the latter becomes extremely emotional

13. He then promises her that no matter what he will help her find a solution together that disappoints neither party

14. At the factory the next day, with Annapoorna’s support, Kamali informs the workers that they will get a lump sum bonus at the end of the year as an incentive. Upon hearing the solution to this problem, the workers emotionally thank Kamali for everything she did for them.

How will Tara react to this new change? Will she accept Kamali into her life? Stay tuned to the next week’s update to find out.

Maduve Mane: 5 Times Hindi TV Star Shraddha Arya Made Us Think She Is A Pukka Kannadiga!