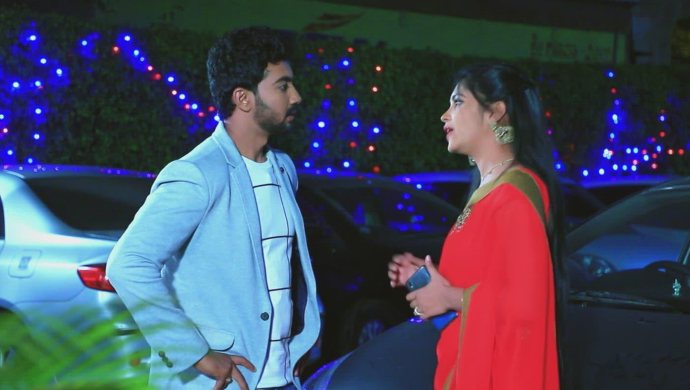 In the week before last in Kamali, Rishi and his family are at the hospital, as the boy from Kamali’s college tried to commit suicide. Anika thinks to herself that Annapoorna will now develop hatred towards Kamali.

Kamali is getting ready to celebrate Valentine’s Day with Rishi. Clad in a red saree, she looks elegant and beautiful. Ningi helps her get ready and tells her that Rishi and she make a perfect couple. Anika comes into the room and realises that it is Valentine’s Day and that she has not even remembered to wish Rishi.

Rishi and Kamali have a romantic time together. She also tells him that she has gotten non-alcoholic champagne as she has discovered that couples drink champagne on Valentine’s Day. Rishi finds himself falling even more in love with Kamali.

At home, Anika is upset and worried that Rishi will never love her back. Her mother tells her that she is overreacting about the same and must calm down. She also expresses her grief over the fact that the man that she was married to for 18 years does not care about her anymore and is running a family with someone else.

Meanwhile, Kamali sees Rohit with another girl as Rishi and she are in the car. However, she says nothing to Rishi and the two stop to have some idli. Rishi compliments the shop that she brings him to and tells her that it is perfect for Valentine’s Day. The two share a romantic moment.

The next day, Kamali tells Tara that she saw Rohit with another girl the previous night. Tara slaps Kamali and the latter cries.

The next day, Chandru decides to sell three acres of his land, to the poor. However, Gowri has a special place in her heart for the property as her father used to work on the field. She tells him that if he wanted to do agriculture on that land, she would have agreed. But because he wants to build a resort, she doesn’t approve of it.

Rishi is upset with the fact that Kamali assumed Rohit to be with someone else. He tells her that he doesn’t want to talk to her and this makes Kamali sad. Later, it is discovered on a news channel that Rohit in fact, had been intimate with that girl and had also cheated on her. Tara shouts at him.

Did You Know Bharath Bopanna Has A New-Found Love For Black And White Photographs?