Last week was filled with romance and joy for Kamali and Rishi. Their Nishchithaartha ceremony began with some hiccups from Anika. Here's a recap! 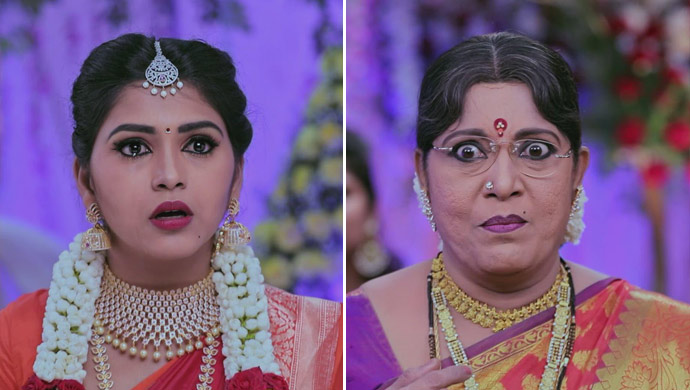 Previously on Kamali, Anika’s suicidal tendency irks Rishi. He gets angrier when Kamali believes that Anika truly loves Rishi. Finally, he lashes out at both the girls and warns them not to treat him like a toy. Soon, he has a one-on-one conversation with Kamali regarding why she wants to get rid of him so easily. The next day, Anika takes up the responsibility of dropping Rishi to the Nishchithaartha venue, much to his chagrin. When Rishi doesn’t reach the venue on time, Kamali gets extremely worried. Upon learning that Anika was supposed to bring him, she gets furious with the latter. Gauri, on the other hand, somehow makes it to the venue and is happy to see her girl dressed so beautifully.

When Rishi finally arrives a little late, a relieved Kamali runs to hug him tightly, much to his surprise. Anika is disappointed to have failed yet again to stop Rishi and Kamali’s engagement.

1. Kamali holds Rishi’s face and asks him if he is alright

2. To taunt Anika, Rishi informs Kamali that his love for her is his biggest protection-charm

3. Sarsa asks Gauri to reveal her true self to everyone but her requests are denied by the latter

4. Kamali takes Anika to a room and scolds for trying to hurt Rishi again

5. What is more shocking to Anika is when Kamali reveals her true feelings for Rishi and asks her to stay away

6. Anika then speaks rudely about Kamali’s bloodline causing the latter to slap her

7. Not only this, Kamali furiously warns Anika that if she ever comes in Rishi’s way again, she’ll have to see her elder sister’s worst side

8. Later, Rishi tries to get Kamali to say the three magic words to him but she keeps quiet causing him to feel sad

9. In her excitement, Kamali screams ‘I Love You‘ to Rishi and everyone is stunned at what just happened

10. She blushes when Rishi softly replies and tells her that he loves her too

11. Soon, Chandru takes his father out for a stroll and is shocked to spot Gauri

12. She, however, is shocked to see him and tries to run away

13. Annapoorna soon announces to the guests that Rishi and Kamali’s marriage has been fixed on the 25th of the following month

14. The engagement ceremony proceeds just as Annapoorna gets a shocking call and leaves the stage

15. Chandru manages to find Gauri by this time and cannot believe his ears when she says that Kamali is his daughter

16. However, he assumes that he is just dreaming because when he looks away for a second Gauri is gone

17. Just as Rishi is about to put the ring in Kamali’s finger, Annapoorna returns and asks them to stop!

18. She comes back on stage and announces to everyone that Kamali is a fraud and she has cheated everyone

19. Tara gravely insults Kamali after this

20. Despite Rishi’s interference, Tara asks Kamali to get lost from there

21. Later, Rishi finds Kamali outside and puts the ring in her finger nevertheless

What will happen now? Will Gauri object to Rishi’s bold move? Stay tuned to the next update to find out.

Keep the entertainment on ZEE5 continued by clicking here.

The Ramya And Diganth Starrer Nagarahavu Has A Special Performance By Dr Sahasa Simha Vishnuvardhan. If You Are A Fan, Click Here To Watch The Film On ZEE5 Now

Kamali Weekly Update 13-21 January 2020: Chandru And Gowri Get Back Together