Kamali Weekly Recap Of 3-9 September 2019: Tara-Kamali JAILED, Thanks To Anika And Kamini

Last week, Anika and Kamini came up with a plan to eliminate their nemesis. Unfortunately for Kamali and Tara, the jail is their destination! 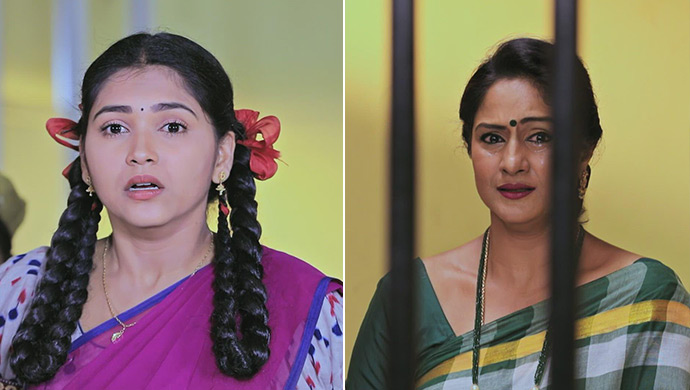 Previously on Kamali, Rishi leaves his house causing Tara to go into depression. While Anika continues to give tips to Tara about how she can bring Rishi back home, he tries to convince Kamali that they are meant for each other. No matter what trouble she finds herself in, Kamali always finds Rishi right there to help her out. Elsewhere, Kamini makes multiple attempts out the blame of Sadanand’s kidnapping on Tara.

Owing to his health which starts deteriorating soon afterwards, Ramesh tries to bring Rishi home but fails. As a last resort, he goes to Kamali to beg for his son. This makes Kamali come to the heart-shattering decision of breaking up with Rishi, her one true love.

Let’s see what happened since then.

1. Rishi follows Kamali till the cafe and pleads to her not to break-up with him, but the latter doesn’t listen

2. He then scolds her for bothering about everyone else in the world but him and asks her if anyone has forced her to take this decision

3. Just as Rishi catches hold of Kamali, who tries to leave from the place, Ningi informs them that Tara is staring right at them

4. Anika, who planned all this, arrives at the cafe, all masked, to see the fun

5. Rishi gets upset with Tara and leaves the cafe when she forcibly separates his and Kamali’s hands

6. Then, she rebukes Kamali for coming between her and Rishi and asks for an explanation as to what is going on

7. When Kamali informs her that she tried to keep Rishi away as asked, Tara slaps her for blaming her son

8. She then insults Kamali in front of her friends and warns her that if she ever tries something funny, a police arrest warrant will come in her name

9. Ningi tries to defend Kamali, but the latter asks her friend not to interfere

10. Anika, excited about what she just saw, arranges for a party for her friends and invites Rishi, but he cuts the call

11. Soon afterwards, she comes back with her friends and tries to show off in front of Kamali

12. Ningi, who is extremely furious by this time doesn’t listen to Kamali and screams at Anika for being so evil

13. Elsewhere, thanks to Kamini, the police arrive at the Nanda house to arrest Tara, much to her disbelief

14. At night, Kamali and Ningi unwillingly have to host Anika and her friends for an alcohol party

15. Thanks to Anika, when the police arrive only Kamali and Ningi are in the cafe. So, they are arrested

16. Upon reaching the police station, Kamali is shocked to see Tara behind bars too

17. The head-inspector insults Tara for such a grave crime and dismisses Kamali and Ningi for a petty one

18. When Rachana informs Kamali that Rishi is nowhere to be found along with the fact that both Ramesh and Rohit are out of town, she defends Tara in front of the cop

19. Looking at Kamali, Tara feels extremely guilty and remembers the time when she warned the former about filing a complaint against her

Will Kamali be able to help Tara get out of jail? Is Tara going to turn a new leaf for Kamali? Stay tuned to the next week’s update to find out.

Watch the latest film releases on ZEE5, by clicking here.

Watch Ramesh Aravind In The Romantic-Thriller Film Amruthavarshini, Streaming On Your ZEE5 Platform For Free

Birthday Special: 12 'Monday Motivation With Ramesh' Lessons That Will Inspire You