Kamali Weekly Recap Of 15-21 August 2019: Are Things Normalizing Between Kamali And Rishi?

Last week on Kamali, Rishi finds out that Kamali has returned to the city and tries to pursue her. Elsewhere, Kamini gives Annapoorna a shocking hint! 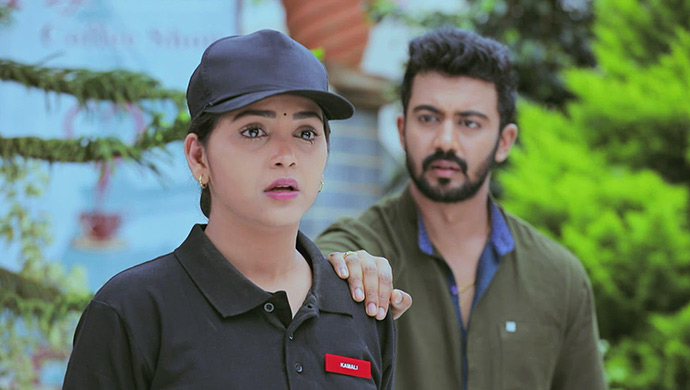 Previously on Kamali, Annapoorna insults Kamali during the engagement and confesses to everyone that she is not her granddaughter, after receiving a peculiar phone call. Turns out, Kamini managed to get Annapoorna’s husband kidnapped and asked someone to blackmail Annapoorna into calling the whole wedding off. So inspire of hating his mother first Chandru realises the reason why she took such a hasty decision eventually. Gauri, who at first is all prepared to take Kamali back to her village is irate when Anika stops their bus mid-way and insults her daughter gravely.

Kamali’s mother then asks her to go back to the city and prove all those who thought less of her wrong, much to Kamali and Ningi’s relief. Anika, on the other hand, manages to convince Tara that she is on her side and it is in her best interest to separate ‘Kesrin’ Kamali from Rishi.

Keep scrolling to know what else happened, here…

1. Urmila asks Anika if she is upset that Kamali returned to the city

2. To this Anika shrewdly replies that she is happy to torture and possibly kill the woman who took away her one true love

3. Rishi leaves the Nanda house after not getting any positive response from his mother

4. In an attempt to fend for themselves, Kamali and Ningi get a job with Rachana’s help

5. Rishi finds Kamali at the cafe soon and tries to talk her out of her stubborn decision to not see him anymore

6. Elsewhere, Kamini instigates Annapoorna against Tara blaming her for the kidnapping

7. Ramesh goes to meet Rishi at his ‘new’ house the next day

8. As Annapoorna is going to meet the commissioner regarding her husband’s kidnapping, Kamini again makes her doubt Tara

9. The next day at the cafe, a customer insults Kamali even though it is not her fault

10. Rishi comes to her rescue but the customer becomes aggressive and threatens to shut the cafe is she isn’t fired

11. The cafe manager helplessly warns Rishi to ask Kamali not to cause trouble to him or his business

12. Rishi later asks Kamali why she still has the engagement ring on but she reverts the question back to him

13. He then promises Kamali that be it one year or 10, he will always love as he does now

14. Anika arrives there just in time to see Kamali and Rishi together and executes her plan to separate them

15. At night, a hostel-mate comes to Kamali’s room to inform her about the photo Anika has put up with Rishi on social media

16. After waking up the next day when Ningi asks Kamali why she is not bothered about the photograph from last night

17. To this, Kamali replies that she knows nothing can happen between them because Rishi is already waiting down for her

18. Ningi goes out to check if what Kamali is saying is true and is delighted to see Rishi

Does this mean that things are getting back to normal with Kamali and Rishi? Find out in the next weekly update.

Watch all the episodes of the crime-thriller ZEE5 Original Series, Auto Shankar, by clicking here.

Don't Forget To Re-Watch The 16 Season Of Sa Re Ga Ma Pa Li'l Champs With Your Friends And Family For Free, Here On Your ZEE5

These Actors Are Sandalwood's Greatest Actors Who Are Even Better In Real Life!