Last week, Kamali finds out the truth about Anika (being her younger sister) and tries to make amends for their past! 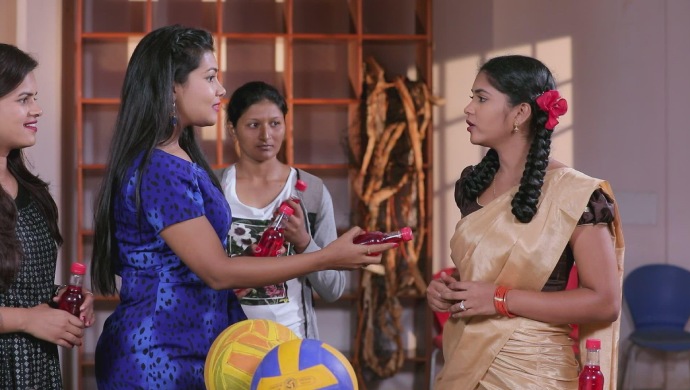 Previously on Kamali, as Shambu recovers from his coma, Kamali finds out that Gauri of the Mahajan family is none other than her mother Saroja. All her emotions come out at once after she runs out of the house hearing this news. Luckily for her, Rishi finds her soon and decides to take her somehow to cheer her up.

Elsewhere, as Ramesh is trying to convince Tara not to behave so rudely with Kamali every time, they spot Manglamma (Gauri) and ask her where she is off to. Upon seeing her distressed so late at night, they force her to go home with them. Kamali is ecstatic to see Shambu conscious again and asks him to get well soon.

Rishi soon drops Kamali back home, who is surprised to see the house decorated. She assumes that everyone has found out about her but turns out the preparations were for Anika’s 18th birthday. However, she refuses to celebrate it (due to the sudden tension of Shambu waking up from a coma).

The next day, Rishi takes Anika, Kamali and Ningi to shop for footwear. In the store, Ningi overhears Anika planning something and decides to trap her in the lift. When things go out of hand and she goes to tell Kamali about this, Ningi is given a tight slap on her face before the former rushes to help Anika.

1. After Anika is saved, Rishi takes Kamali to the hospital so that she can receive medical supervision for her injured hand

2. Then he gives her a surprise by taking her to his house to meet Gauri

3. However, Tara comes there and screams at Kamali for an uninvited entry to her house

4. Upon seeing her mother not say a word to all this, a heartbroken Kamali leaves from the Nanda house

5. In the evening, when Anika’s birthday is re-arranged, she throws away the cake

6. Much to everyone’s astonishment, Anika throws the cake and part of it falls on Chandru’s face

7. Soon afterwards, Kamali goes to console Chandru and cleans his face without another word

8. After calming down a little bit, Chandru then shows Kamali the wardrobe where he kept all of her gifts since her childhood

9. The next day, Anika pretends to like Kamali and Ningi’s company and takes them on a car ride far away from the city

10. Then, she gives them the news that the college Kabaddi team selection will be happening in the afternoon

11. However, when she tells them that her plan was to ensure they don’t reach on time, they are shocked

12. Unfortunately for Anika, her plan fails and Kamali-Ningi arrive there but a little late

13. Not only does the coach ask them to change into the proper attire but asks them to take five laps around the ground as punishment

14. Later, when the time to select the team captain comes, a confident Anika steps forward assuming that no one will dare to challenge her

15. She is wrong again as Kamali steps forward too and the coach announces a match between them as the deciding factor

16. Much to Anika’s annoyance, Kamali wins the match

17. In the canteen, Kamali feels uncomfortable when Rishi gawks at her in the Kabbadi outfit

18. Soon, Anika and her sidekick go to the coach to convince him to make the former the team captain and they assume their work is done

19. However, the coach selects Kamali as the captain and gives the entire team reasons for him doing so

20. To get back at Kamali, Anika mixes alcohol in her sports drink and makes her have it

What will happen to Kamali now? Is Rishi doing to be her saviour again? We’ll know in this week folks, don’t go anywhere.

I Had Absolutely No Plans Of Doing Anything Else: Gattimela’s Rakshit On…

Sharath Padmanabh On Paaru: It Was Tough To Play The Role Of A Rich Businessman
+
Explore More

Watch Premier Padmini, Now Streaming In HD Only On Your ZEE5

DKDFW2 Weekly Recap: The Zee Kannada Kutumba Geared Up For The 'Family' Round Challenge