Last week, Tara revealed her true intentions to Kamali, causing the latter to be dumbfounded. However, Kamali stood her ground and here's how it went! 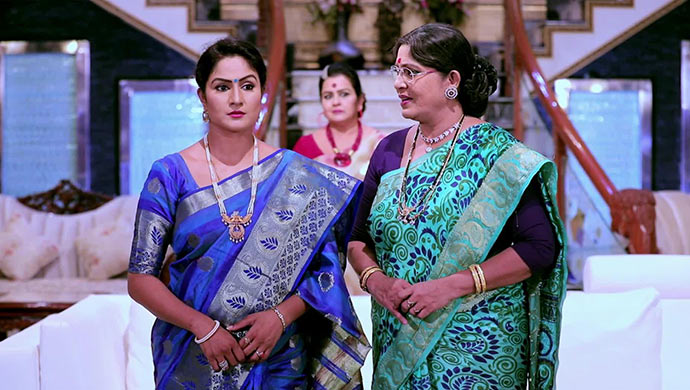 Previously on Kamali, after the whole factory worker situation, Annapoorna is pleased to announce to her family that Rishi’s family is finally coming down to ask for Kamali’s hand in marriage. Anika, who cannot control her anger after listening to this, pulls out her mother’s gun to take revenge. Despite some discrepancy that Kamini creates by switching Kamali’s Jathaka, Chandru fixes the problem and the engagement is confirmed. That night, Rishi takes Kamali on a date to buy her new shoes (as Anika destroyed the ones he had gifted previously). However, the situation turns against them as Kamini sends some paparazzi to make them meeting secret look like sensational news. Thanks to Rishi, the situation is handled and the next day both the Mahajans and the Nandas go jewellery shopping.

Take a look at what happened next…

1. Tara agrees with Kamini that Kamali must be removed out of Rishi’s life without his knowledge

2. Anika’s plan to get Kamali caught after putting unbilled jewellery in her bag fails, thanks to Ningi

4. When Tara talks about Kamali’s mother, she gets furious

5. Kamali then makes it very clear to Tara that no one can separate her from Rishi

6. To Tara’s surprise, when Rishi comes there, Kamali says nothing about what his mother just did

7. At the location of the pre-wedding shoot, Anika and Urmila come up with a plan to teach Kamali a lesson

8. Just before make-up when Kamali goes to wash her face, Anika finds an opportunity to switch the makeup with something that causes an allergy

9. Unfortunately, the Anika places for Kamali is used up by her mother

11. Back at home, Tara asks Kamali to take a DNA test, much to Annapoorna’s astonishment

12. Chandru gets furious and soon agrees to do the test and he believes that she is his real daughter

13. Rishi, who arrives there shortly after is devastated to see his mother’s new avatar and realises that all she did for Kamali was a farce

14. He loudly informs everyone that he loves Kamali and there is no need to do any test.

15. Annapoorna later talks to Chandru and her husband about how to make the lie they have just said into the truth

16. Rishi apologises to Kamali for the way his mother treated her before

17. When Kamali tries to console Rishi, he informs her that she doesn’t deserve such insult

18. In the end, she reveals the truth about her being a Mahajan to Rishi and asks him for forgiveness

19. However, Kamali is shocked to know that Rishi already had an idea about this

Will Kamali and Rishi’s bond become stronger after this? Stay tuned for the next week’s update to find out.

Watch the Celebration Round on Sa Re Ga Ma Pa Li’l Champs Season 16, streaming on the ZEE5 platform.

Click Here To Watch The Latest Episodes Of The Newest Show On Zee Kannada, Radha Kalyana, Streaming For Free On Your ZEE5

Inspired By Rishi-Kamali's Jathaka Hondanike, Here’s What Kundali Matching Is All About