Anika misreads the information that Rishi is coming to ask for her hand in marriage and is at a loss of words when she finds out the truth. 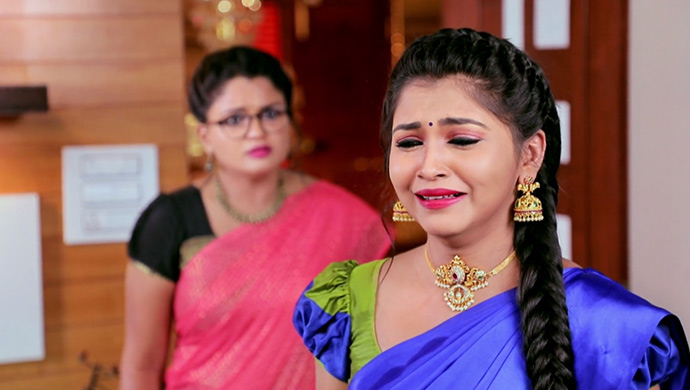 After Annapoorna Mahajan’s reveals that Kamali is her hiriya mommagalu, things have again taken a drastic turn. There is some good news and bad news for all you Kamali fans. But before that, let’s continue from where we left off! It was that car ride that changed everything for Kamali and Rishi. Not only did Kamini put both of them in a death ride, but to Kamali and Rishi’s bad luck, the voice recording he had made for her confessing his love, starts playing aloud. Despite Rishi’s pleas, Kamali listens to every word and just as she is about to say something, their car crashes into a tree!

1. An injured Rishi tries to bring Kamali into consciousness

2. Kamali, however, gains conscious for a minute and is about to say something before she faints into his arms

3. Back at home, Rishi worries about Kamali’s silence and wonders why she hasn’t said a word

4. Ramesh gives Rishi the good news that they will be taking a marriage proposal to the Mahajan house to ask for Kamali’s hand

5. Anika tells Kamini that the only way she will forgive her for putting Rishi’s life in danger is if she gets her and Rishi married

6. While Rachana informs Ningi that they on their way to ask Kamali’s hand for marriage, Anika overhears and thinks that the proposal is for her

7. The Nanda family is surprised when Anika dresses up and expresses excitement to get married to Rishi

8. When Ramesh clarifies that the proposal is actually for Kamali, both she and Anika are shocked

9. Anika removes her anger on Kamali blaming her for taking away Rishi

10. When Kamali comes down later, she informs everyone that she is not happy with this proposal and rejects Rishi, much to his astonishment

11. Soon, Ramesh consoles a heartbroken Rishi and tries to figure out with him the reason of Kamali’s rejection

12. Elsewhere, Ningi almost curses her best friend for doing such a ghastly thing

13. To this, Kamali reveals the most shocking truth of her life – SHE LOVES RISHI!!

14. Kamali then informs Ningi that she said no because Tara was forced to accept this relationship

15. Her other reason is that now she is a ‘pretend Mahajan’ so if and when she marries Rishi, she should be accepted as just Kamali

16. Annapoorna overhears Kamali making Ningi swear that this secret will never be revealed to anyone else

17. Anika too overhears them and furious to know that Kamali is actually irrevocably in love with Rishi

Well, the good news in this scenario is that Kamali still doesn’t know she is an actual Mahajan, and she and Rishi love each other. The bad news is it might take some time guys and girls! So we’ve just got to wait out this gloomy phase in Kamali and Rishi’s life because the future looks, super-bright people!

Are You A Fan Of T S Nagabharana Sir? Don’t Miss His Special Episode On Weekend With Ramesh Season 4, Streaming in HD On The ZEE5 Platform.