Kamali's favourite duo Adi and Kamali are here to entertain you this weekend. Details inside! 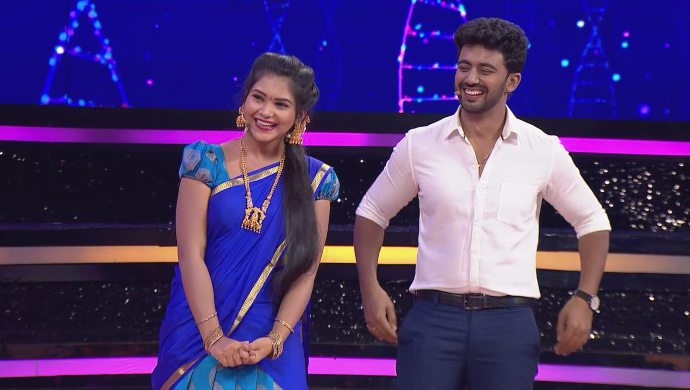 In the previous episode of Genes, beautiful Sushma Rao welcomed Kaamini, Anika, and Urmila from your favourite show Kamali. The next episode welcomed Nayana and Shivaraj K.R Pete from Comedy Khiladigalu, who undoubtedly were the funniest of them all.

This week, Sushma Rao was back with another episode of Genes, and we could not wait to see the fun games that she had lined up for us! We must say that she looked more gorgeous than ever.

Rishi and Kamali were as excited as we were for this episode of Genes! The two also gave us a cute dance performance as soon as they entered.

With three set of parents on one side and five children on the other, the Kamali couple was asked to guess which child belonged to which set of parents.

Another interesting round was ‘Celebrity Album’, where there were five celebrities with five of their respective relatives, and the three sisters were required to guess which relative belongs to which star.

The couple won this round!

Rishi and Kamali also shared a cute moment during the game!

The two of them had a fun moment with the kids who took part in the game.