Last week, Aarya helps break off the wedding alliance between Anu and Sampath, which is when the true nature of Raghupati is revealed to Pushpa! 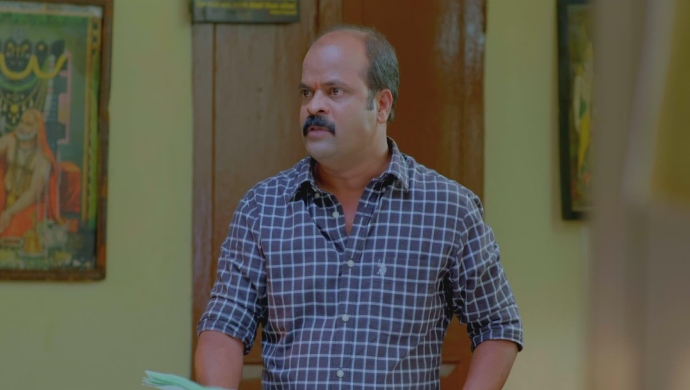 Previously on Jothe Jotheyali, Meera doubts Aarya’s whereabouts and goes to Anu’s house to check if he is there. Luckily for Anu, she sees Meera coming into he compound and does a good job at hiding Aarya in the washroom. Jhende tries to advise Aarya against helping Anu so much but the latter doesn’t accept such suggestions.

Also, Anu celebrates the arrival of her first salary ever with her parents and Aarya while Sampath goes and tells his father that his soon-to-be wife doesn’t plan of giving any of her earned income to them. At Anu’s house, a revised rule letter comes from her office which she goes to show to Raghupati on Aarya’s insisting.

When Raghupati sees that the documents clearly state that Vardhan group of companies will not do any business transactions with the families of any employees, he is furious. Upon learning from Aarya that this is true, without giving it another thought Raghupati calls off the wedding.

1. Subbu and Anu try to cheer up Pushpa’s foul mood after Raghupati calls off the wedding

2. When she goes to Raghupati, he and Rajani insult her gravely and ask her to leave immediately

3. Feeling bad for her, Aarya comes to talk things out with Raghupati that he was planning to change the rules for him but since he isn’t interested, he and Pushpa prepare to leave

4. Much to Pushpa’s horror, after Aarya agrees to change the rules Raghupati turns over a new leaf and decides to give Anu another chance

5. Seeing at how shallow he is, Pushpa immediately calls off the wedding, with Aarya following her out

6. Raghupati comes back later to Subbu’s house to threaten him about his shop

7. However, looking at Aarya the shop owner himself backs out from knowing Raghupati at all.

8. To thank Aarya for all his help, Pushpa asks him to come over for a luncheon the next day

9. That evening, Anu and Aarya both smile thinking about all the times they spent together in the last few days

10. Just then Jhende reminds Aarya that it is Harsha’s birthday today and they head over to the office

11. Harsha shows off his latest buy – a money-printing machine but it turns out to be a flop causing him to get upset

12. Elsewhere, Anu prepares a love letter to give to Aarya describing her feelings and reads it out to her best friend

13. The next day, Aarya is invited to a luncheon with the Sirimane family

14. To his bad luck, Jhende doesn’t let him go and gives him an ultimatum to choose between his friendship and the Sirimane family

15. Meanwhile, Anu, Pushpa and Subbu enter the restaurant and get themselves comfortable but later are sad that Aarya couldn’t make it

16. The next day, Meera gives Anu an impossible task of making a presentation for important clients in ten mins

Will Anu do this task successfully? When will Aarya tell Anu how he feels? We’ll find out soon stay tuned.

Are Comedy Dramas Based On Kids Your Favourite? Then Don't Miss The ZEE5 Original Series Babbar Na Avaantaragalu, Now In Kannada

Paaru Weekly Recap Of 20-26 Nov 2019: Aditya Gets Restless About His Alliance With Anushka

Get Your Chance To Take Part In DKDFW2 This Weekend. Dimpanna-Anoop Will Tell You How!