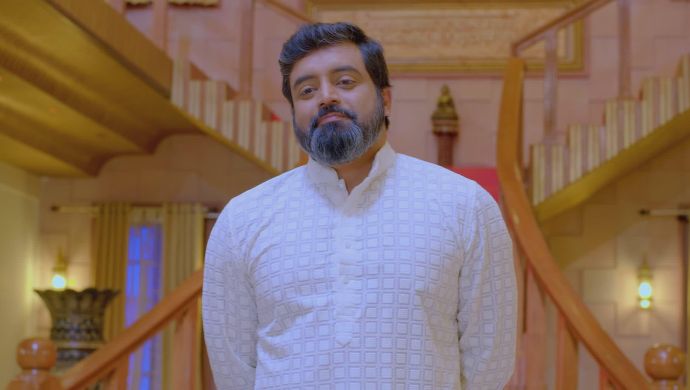 In the previous episode of Jothe Jotheyali, Anu and Subbu try to console Pushpa who has been arrested. The policeman tells them not to waste time in doing so and advises them to find a lawyer to release her. Just then, Jhende and Arya come and talk to the station head who then releases her.

In this episode, everyone is at the dinner table in Arya’s house. At the table, Arya tells Sharada Devi that Anu’s mother was arrested for raising the issue of garbage disposal with the corporation. Harsha and Sharada Devi ask him if she has been released from the jail and he tells them everything that happened. Sharada Devi has prepared a sweet for Arya since he will be going to London and Harsha will be taking over all the responsibilities of Vardhan Group of Companies. They are all praising the carrot halwa that has been prepared by her.

Sharada Devi starts talking about Anu’s mother being arrested. She says that it is unfortunate that people are unaware of a concept such as waste segregation which leads to such problems. She also begins to talk about mental peace and says that people must express whatever they feel, so that their heart does not feel burdened with problems. Arya starts to think about what his mother said about expressing feelings and thinks to himself if he should confess his feelings for Anu.

At home, Subbu and Pushpa are talking about Anu’s London trip. Pushpa asks him why he had to stop Anu from going to the UK capital. He says that she can work and earn at any point but her upcoming exams are more important. She must focus on completing her studies for a brighter future. Meanwhile, Subbu and Pushpa’s neighbour Raghupati has been arrested for unknown reasons. Sampath runs behind the policeman who has arrested him.

Birthday Special: 5 Things You Didn’t Know About Niranjan Aka Rishi From Kamali