The police come to the area in which Pushpa and her neighbours are protesting; They take Pushpa to the station. 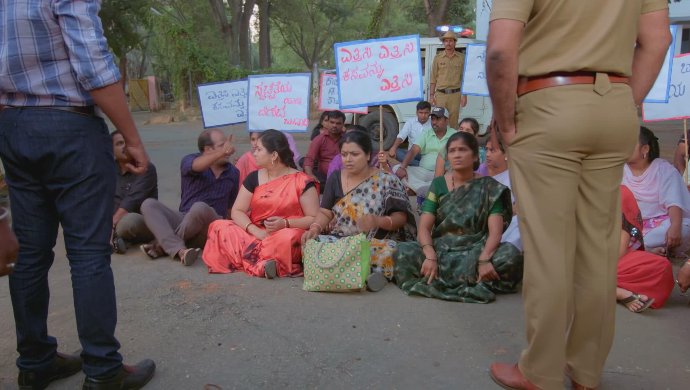 In the previous episode of Jothe Jotheyali,  Subbu and Anu have visited Arya. Subbu tells him that he does not think of it as appropriate to let Anu travel on an international trip, when she has not even completed her studies. Meanwhile, Pushpa gathers her neighbours and asks them what they would like from London, so Anu can bring it back when she comes. Just then, she receives a call from Subbu, telling her that Arya has agreed for Anu, to not go to London. The two seem upset when she tells him that he was wrong to not let Anu take that opportunity.

In the next episode, Pushpa and the rest of the neighbourhood are protesting, with regard to some of the unsolved issues in their area. They are all asking for justice, when the police arrive. The police ask the protestors why they are creating such a ruckus in a public area. They tell them all the issues pertaining to their area, after which one of them tells the police that Pushpa is their leader. They take Pushpa to the police station.

This Weekend's Episode Of Genes Promises A High Dose Of Entertainment