Sharada Devi and Arya have a long conversation about how he feels a certain unrest; Sharada Devi consoles him. 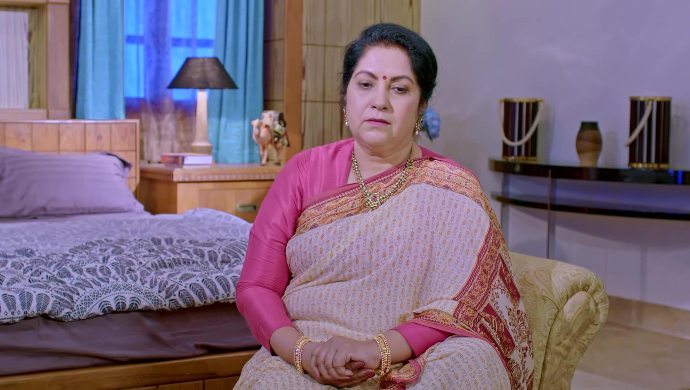 In the previous episode of Jothe Jotheyali, Subbu comes back home tired. Pushpa asks him if he spoke to Neel about the wedding and he says that he did not even get close to talking to him about it. Upon being questioned further, he expresses his fear of talking about his daughter’s marriage. They also wonder if it would have been uncomfortable for Neel to talk about his own wedding. They also discuss the necessity to talk to Arya about the same so that they can better understand how to go about the situation.

In this episode, Anu wakes up shivering. Pushpa and Subbu get worried as Anu’s nightmares have come back. Pushpa begins to cry while wondering where they have gone wrong and why God is punishing them in this manner. Anu, meanwhile gasps for air and begins to cry. Pushpa makes her sleep on her lap. Elsewhere, Arya and Sharada Devi are talking. They both ask each other why they haven’t slept even though it is so late at night. Arya tells her that he feels a certain unrest in his heart. He also says that he is confused if he will ever be able to stand up to his word. He expresses his feelings regarding the same. She also gives him a lot of advice as they have a long conversation. She tells him to believe in himself. Arya tells Sharada that she is his strength and asks for her support for every decision he makes. When he leaves, Sharada looks concerned.

The next morning, Jhalander and Neel talk about conspiring against Arya again. Neel does not look too sure about Jhalander’s plan. He apologises to him by telling him that he cannot go against Arya. Jhalander, on the other hand, tries to convince him out of it and ask him to support him in all his decisions. He also asks him if he is in love with Anu. Later that day, a man meets Anu and tells her that Aaryavradhan is dangerous to her life. She, however, tells him that she completely trusts Arya and nothing can go wrong with her when she’s with him. He tells her not to be so sure of everything. Anu gets tensed about the situation and wonders about who the man is.