Anu has finally met Arya; as he has not eaten, she feeds him some apple. 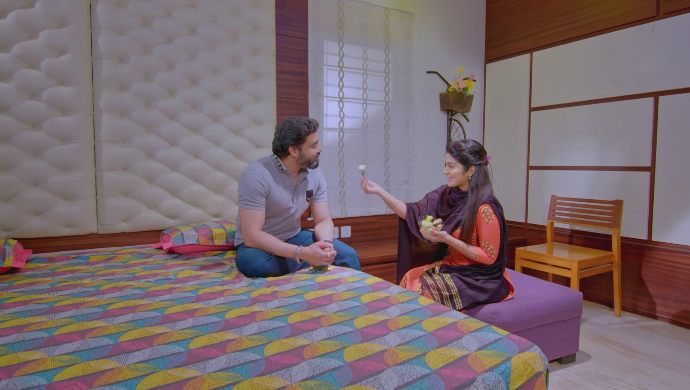 In the previous episode of Jothe Jotheyali, Arya and Anu are in their houses and thinking of each other. They both want to confess their love for one another but cannot seem to gather the courage to do so. The next day, Jhende tells Arya that he must stay in his house for the sake of his safety. Meanwhile, at the office, Harsha is changing the whole Vaastu of the workplace.

In this episode, Arya informs Anu that he has not gone to London. Anu, thrilled to learn this, goes to his house to meet him. She discovers that he has not eaten anything all day. Anu begins to feed an apple to Arya, as he is hungry and tells him that Subbu always used to tell her that hunger brings people closer to each other. When he asks her how, she feeds him another piece of apple and says that the same happens, just by feeding someone.

Yet Another Entertaining Episode Of Genes With Akhilandeshwari And Parvathi Of Paaru!