The devi visits Anu before she leaves for her exam and asks her to go to the temple that day. 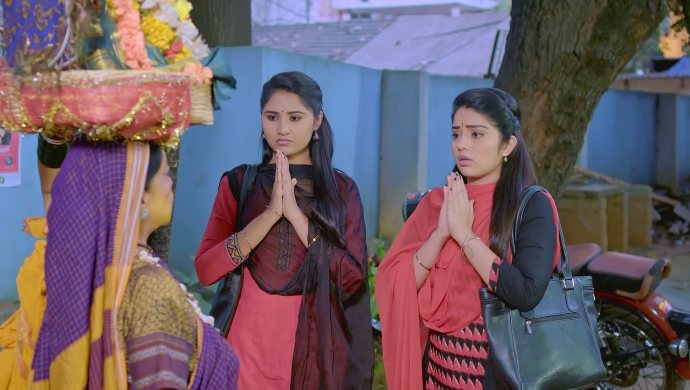 In the previous episode of Jothe Jotheyali, Arya comes to the terrace to meet Anu who doesn’t notice him because she is studying. She doesn’t believe that Arya has come to see her. She is surprised and gets very excited. She asks him how he knew that she was studying on the terrace when he tells her that Sampath is his informant who tells him everything. Then, Anu and Arya spend some quality time together.

In the next episode, Subbu notices that Anu is a little tense. Upon asking Pushpa, she tells him that the day is Ashtami and that’s why she might be worried. He asks Anu if she studied well that night and says that if she had woken her mother up, she would have made tea for her. However, Anu says that she managed well the previous night and is prepared for her exam. She also tells her father that Arya had come home the previous night and tells him that she made tea for him and also brought all the needed ingredients to make the same. Pushpa tells Subbu that Anu has not slept and is imagining things now. Anu replies to her saying that Ramya was present when he visited her. Pushpa is thankful to God when Anu tells her that he also cleared all the doubts she had for her exam.

Later, Anu and Ramya leave for the exam. Just then the Devi comes to Anu and tells her that she has more important things to pray about other than her exam. While her exam is important, she must go visit the temple and pray to God as it is Ashtami. Anu looks worried. On the other hand, Jhende and Arya are talking about Jhalander in the office and are wondering why he is trying to get Anu. Jhende tells him that he is worried about Arya and not Anu at all. He tells Arya that he will need him to cooperate with him.

After Anu’s exam, Arya picks her up from her college and takes her to the temple.

I’m A Person Who Loves Surprises In Life: Ashika Rangnath On Her…