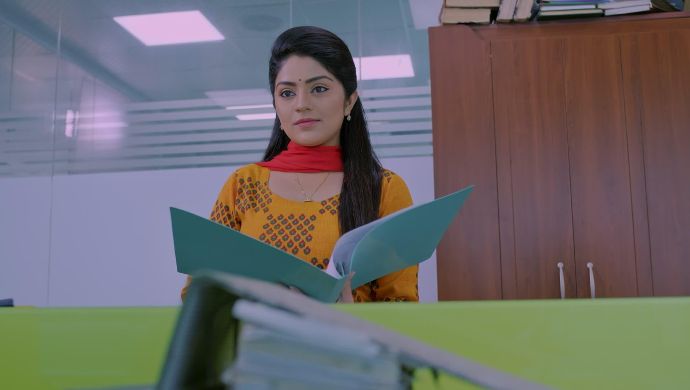 In the earlier episode of Jothe Jotheyali, all the employees are complimenting Arya for the way he is casually dressed. They all tell him that he looks young and dashing. Meanwhile, Sampath is trying to spy into Anu’s house. Her mother comes from behind and tells him not to try and spy into their house as nothing big is happening.

In this episode, Arya tells Anu that he will be sitting at her desk for the day. Anu takes the idol of Lord Ganesha and prays to it. When Neel sees her doing so, he asks her if she prays to the idol every day. She looks towards Arya in a secretive manner and tells Neel that starts off the day by praying to her God. Arya realises that Anu is talking about him and blushes to himself. Neel then goes on to talking about Arya by praising him about some of the insightful things that Arya had spoken many years ago. Arya is impressed with Neel. Just then, Meera comes in and tells Arya that there are a few confidential matters that she has to share with him. As he goes out, she tells Anu that she would have to help Neel out as it is his first day at the office. She agrees.

Meera apologises to Arya for making all arrangements of welcoming Neel without asking him. As Neel was Mansi’s recommendation, she thought of it as important to make all arrangements on time. Arya tells her that with everything happening around him, he had completely forgotten to welcome Neel and thanks Meera for doing so. Neel and Anu are doing some work. Meanwhile, Arya is sitting at Anu’s desk and reminiscing about the moments he has had with her. Just then Anu walks in and the two smile to each other.