Anu receives a grand welcome when she re-joins her  office; Everyone is surprised to see her 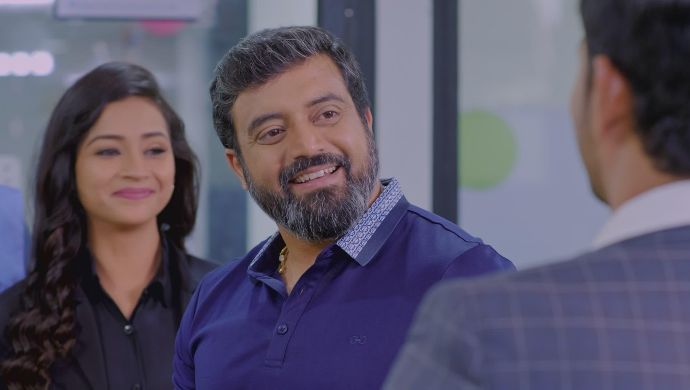 In the earlier episode of  Jothe Jotheyali, Arya tries to apologise to Jhende but he doesn’t say anything. He repeatedly asks Jhende to reprimand  him. He also suggests that he at least shout at him but not to be quiet. Arya tells him that he was very angry and sad that Jhende could not understand his feelings. He keeps asking Jhende to talk.

In this episode, all the employees are complimenting Arya for the way he is casually dressed. They all tell him that he looks young and dashing. Just then, Jhende tells him to go back to his office instead of waiting for whoever it is to come. Arya tells him that he is standing there for a reason and will wait until that person comes. While Arya is actually expecting Anu, a man enters the door. It is not who Arya was expecting. Meera introduces him as Neel who has been recruited on the ISL campus. Arya hands over a bouquet and Neel thanks him. He tells him that he has always dreamt to work with Vardhan Group of Companies. Everyone introduces themselves to him. Meera and Jhende are talking to each other hoping that Arya has forgotten about Anu.

Meanwhile, Sampath is trying to spy into Anu’s house. Her mother comes from behind and tells him not to try and spy into their house as nothing big is happening. By that time, Sampath’s mother takes him back home. On the other hand, Anu enters the office. Everyone is surprised to see her and asks her if she has forgotten to go to Hubli. Some of them do not look happy. Arya tells everyone that Anu will not be getting transferred.

Aarthi Or Sarika: Who Will End Up Becoming Mrs Vikranth Vashishta On Gattimela?…