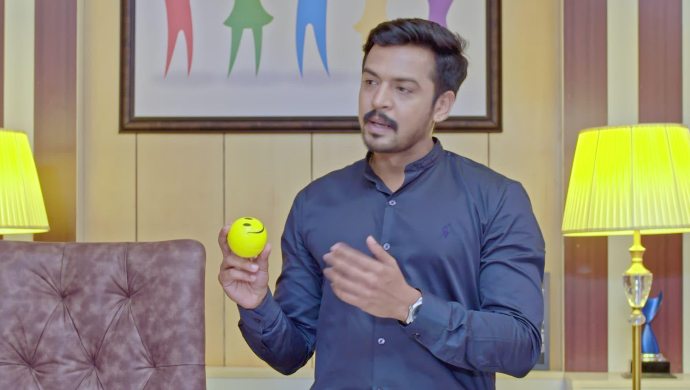 In the previous episode of Jothe Jotheyali, Arya calls and asks Jhende where he is. Jhende tells him that he was chasing Jhalander but he escaped. Arya tells him once again that that he can take care of himself. Jhende replies him that he has eaten the salt of his house and will protect him as much as he can.

Harsha calls everyone for a conference. Jhende asks him what happened. However, he also notices the fact that there is a box of smiley-faced exercise ball just like the one Jalander leaves as a clue everywhere he goes. Jhende asks Harsha where he got them from to which he says that he met a Swamiji who came to his car in the morning. The Swamiji advices him to press this ball for at least q5 minutes per day so that the mind will get relaxed. Jhende and Arya get suspicious. He also says that one’s brain becomes more active when they press this ball for 15 minutes. Arya stops him from talking to ask him if he got all this advice from a Swamiji to which Harsha agrees.

Meera, then, asks him if he paid for the same. He says that the Swamiji was kind enough to give it to him for free. He also advices the employees who are seated at the conference room to perform the exercise for 15 minutes so that they will perform better and tells them that he will ask them for their feedback in 20 minutes. Jhende stops him and tells him to give the employees a week so that they can give him accurate feedback.