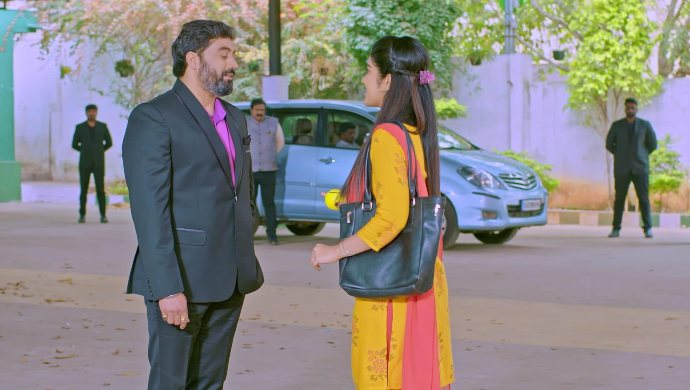 In the previous episode of Jothe Jotheyali, Ramya comes back from Anu’s house late at night. Rajini and Raghu tell her to stay away from Anu and her parents, since random people have begun to come to their house. Arya has come back home. Sharada Devi hugs him and asks him if he is feeling okay. She also asks him if Jhalander caused him any harm. He tells her not to worry and to go to sleep as it is late in the night. She tells him that she feels calmer because he has Jhende to protect him.

At home, Pushpa is fetching water from the neighbourhood when Ramya’s father comes and questions her. He asks the neighbours why they are talking to Pushpa. He questions her character by saying that she sends her daughter with older men and is teaching her the wrong things. Subbu tells Pushpa to ignore him and not say anything in return.

Elsewhere, Ramya and Anu are travelling in the auto that Jalander is driving. When they reach the college, Anu sees Arya waiting for her. She expresses her excitement and asks why he has come to the college to see her. He tells her that he is waiting for her to come back to work. She replies that she is waiting for her exams to finish. Jhende just watches the two and does not seem happy with their interaction.

In the office, Meera asks Arya why he came to the office and tells her that she is worried. He tells her not to worry and to trust him to be safe.