Subbu tells Pushpa that he has failed as a father and his meeting with Arya did not go well. 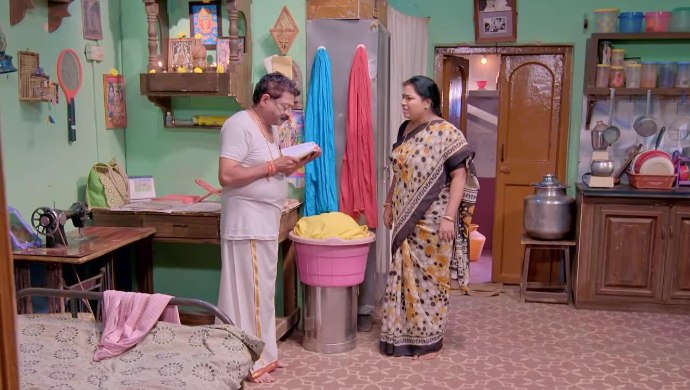 In the previous episode of Jothe Jotheyali, Subbu comes to the office to meet Arya to talk about Anu’s marriage. Before doing so, he tells Arya that the latter has always been there for the family and supported them which is what brought him (Subbu) to have a conversation with him. He, however, talks to Arya about uniting Neel and Anu, which shocks him. Arya was under the impression that Subbu came to discuss his union with Anu. Later, just as Subbu is leaving, Anu comes running into his office to ask what her father was doing there. Jhende tells her that he came for some work regarding his saree shop.

In this episode, Meera is wondering what Anu and Arya were talking about in his office. She also analyses the change in Arya’s behaviour ever since Anu has entered his life to say that he has become so emotional. She then curses Anu for bringing about this change and thinks to herself what about Anu makes Arya act so differently. Every plan she has conspired against Anu has miserably failed. Meera also goes on to tink about Neel and wonders why he was sent away on such short notice.

Meanwhile, at home, Subbu is praying to God that evening. Pushpa tries to ask him how his conversation with Arya went. Subbu breaks down to say that this is the second time he is losing a battle of trying to get Anu married. When Pushpa asks him to be more clear about what happened that day, he begins to read out of the Gurucharitra. Elsewhere, Mansi gets a message from Neel thanking her for all the help and also informing her about leaving the country. Mansi is taken aback and wonders why Arya did not say anything about it. She decides to confront him about the same.

Later that night, Anu comes back home and finds Subbu looking a little lost. She sees him reading the Gurucharitra loudly. As she tries to stop him, Pushpa pulls her to the side and tells her not to stop him from reading it. On asking her mother why Subbu came to the office, Pushpa tells Anu that he did so to talk about Neel. She also mentions the fact that Subbu wanted to ask Arya to help Neel and her get married. Anu is in disbelief and when Pushpa says that they should have spoken to her before going, the latter agrees.

Kavitha Gowda And Dileep Shetty’s Vidya Vinayaka Must Be Revisited! Here’s Why