Jodi Hakki 17-24 April 2019 Roundup: Kadambari And Nanditha’s Plan For Rama Is A Hit

Kadambari and Nanditha plan to send Rama to jail, using Mahima as bait. Will Rama be able to save her? Keep reading to find out! 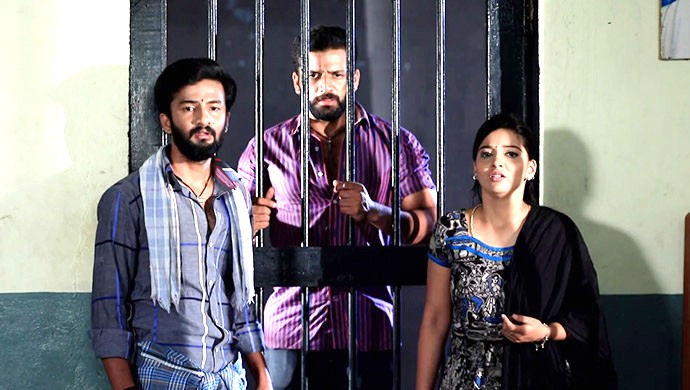 Since the time Parvathi has come into the lives of Janaki and Rama on the Zee Kannada show Jodi Hakki, life has been better for them. Right from getting their own house to getting jobs, Rama and Janaki have proven time and again that if your partner is with you, you can achieve anything. But since Kadambari has come into their lives to take revenge for her younger sister Nanditha, things keep fluctuating in their lives. To top it Parvathi now knows who she is.

So how are things going in the lives of all these characters? Let’s recap the last week for you.

1. Rama blames Manju for getting stuck with a petty job for Kadambari, without Janaki’s knowledge.

2. Janaki, on the other hand, tries to ask Parvathi what’s troubling her but fails in every attempt to find out what’s wrong

3. At the Doddmane, Nanditha gets an idea when Ashok speaks about a summer camp Ad in the paper. She, however, keeps her intentions secret from him

4. Janaki takes away Rama’s bicycle keys and keeps him on house arrest for two days

5. Elsewhere, Nanditha reaches Kadambari’s house and sends Mahima to the summer camp without informing the latter about what is going on

6. At the camp, Nanditha stations her goons to keep a close watch on Mahima and to ensure she doesn’t know what’s going on

7. Finally, Kadambari out of frustration makes Nanditha reveal her plan

8. While Janaki is studying Rama forcefully makes the village boys study too, despite their vacations going on

9. Kadambari makes the call to the cops to inform them that Mahima has been kidnapped and she has a doubt on Rama

10. At home, Rama and Janaki share a romantic moment which will cause butterflies in your stomach

11. Meanwhile, constable Govind confirms the inspector’s doubts and it is soon decided that they cannot wait anymore

12. Soon, Manja and Janaki are at the police station and are shocked to see Rama thrown behind bars

13. When Manja threatens the inspector to call Appanna for help, Rama gets furious

14. The next day, Kadambari and Nanditha make use of Janaki’s vulnerability and taunt her all they can

15. Janaki responds with a crisp answer warning them to steer clear of her and her family

16. Nanditha changes the plan of Mahima’s return and asks her goons to keep the little girl busy till she gives further instructions

17. Mahima has no problem keeping herself entertained

18. In jail, Rama worries about what will happen with his mother and Janaki without him

19. At Kadambari’s home, Nanditha promises to teach a lesson to Janaki for her attitude

20. Mahima, however, learns that she is actually kidnapped and is shocked

21. Janaki finds Mahima in time and makes her escape with her

22. Unfortunately, they get caught by the goons but not before Rama comes to save them

Will they reveal Nanditha’s name? How will the police react? To know more stayed tuned to Jodi Hakki, streaming for free on ZEE5.

Watch Kamali, if you want to know how far Rishi and Kamali’s love story has reached by clicking here.

You Will Love Kannadada Kanmani If You Like Puttanigalus Making Their Voices Heard. Click Here To Stream It On ZEE5 Now

Aditya And Paaru Are Married For Real And Are Now On A Major Guilt Trip. Your Thoughts?

Did You Know That The Voice Of The Bus In Rajaratha Was Given By None Other Than Appu Sir?