Kamali TWIST: A Shocking Flashback Reveals Why Annapoorna Made Kamali Her Mommagalu

Here’s the back story on how Kamali became a Mahajan. Two points for anyone who was thinking that Annapoorna still doesn’t know the truth about Kamali 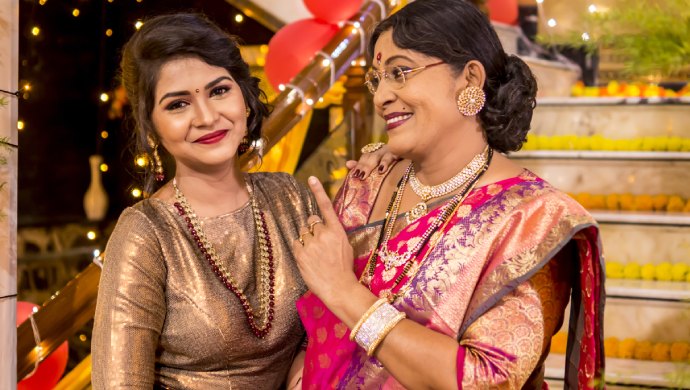 As Kamini, Urmila and Anika prepared for the latter’s coronation as the sole heir to Annapoorna’s property, she threw a bomb in everyone’s face by introducing Kamali as her hiriya mommagalu. Along with the three antagonists, even Tara was in disbelief that Kamali could be a Mahajan and the same mommagalu she promised to give Rishi’s hand to. After the announcement, while Kamali still looks shocked by the change in the situation, I bet some of you must have thought that there is something fishy about this scenario. And you are absolutely right!

Annapoorna still doesn’t know that Kamali is her real hiriya mommagalu. In a flashback, Annapoorna requests Kamali to act as her granddaughter in order to save her entire wealth going into Anika’s hands. All of us know that Annapoorna finds Anika to be an irresponsible kid pampered under the protection of her mother and her ammamma. So it was but obvious that Annapoorna would take such a step. Aren’t you glad though that she took the guruji’s advice and did what her heart told her to? Which was accepting Kamali as her granddaughter?

Kamali too, who pretends to be Annapoorna’s hiriya mommagalu has no idea about her relationship with the former. Since it feels like she obeys her Annapoorna Ajji’s command. And boy, did she do a great job at it or what? Even Rishi believed this charade and is happy that Tara cannot do anything to stop his love from coming true, seeing that she promised Annapoorna that she would get Rishi married to her hiriya mommagalu.

Is it just me or the story of Kamali just got more interesting? What do you think should happen on the show next? Write in your thoughts and ideas in the space below.

Parvathi Takes Akhila's Place To Fool Makrand: What A Slap In The New Villain's Face