In A Q & A Session With Fans, The Entire Cast Of Gattimela Gave Some Amazing Replies

In an attempt to gather all the fans for their first ever Jaathre, the entire cast of Gattimela got down for a LIVE question-answer session with fans! 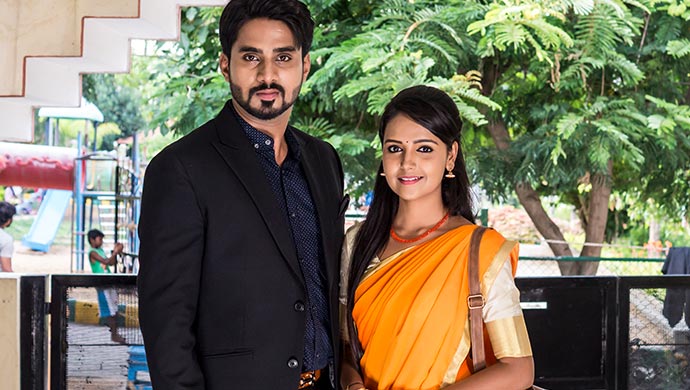 A brilliant show suited for millennial crowds is the No. 1 show on Zee Kannada, Gattimela. Starring Nisha Ravikrishnan and Rakshit in the lead roles of Amulya Manjunath and Vedanth Vashishta, respectively. The onscreen chemistry of these actors is so strong that you can feel the atmosphere around you getting hotter whenever they get close. So much so, that is almost every episode since Amulya and Vedanth got together to fix their siblings up, there has never been a dull moment between the two. Since you guys just love this show, all the cast members of Gattimela including the sisters of the Manjunath household decided to answer some of the most frequently asked questions of the viewers and they had a cool answer for everything.

Apart from this, the sisters confessed a few things about each other too. Like for example, did you know that Aarthi in real life is the most talkative out of the four? While Adithi apparently is just like how she is onscreen, we found out that Amulya in real life is a completely different person. Also, amongst the four, the youngest is the biggest drama-Queen!

If you are interested, you can check out their full-length interview below, or continue reading about what they said overall…

The entire cast of Gattimela spoke to us in three segments, so let’s look at the gist of each:

During their session, fans asked all sorts of questions right from ‘Who will Aarthi get married to eventually?’ to ‘How did Mahathi bag the role of Anjali on the show? Surely, it was Aarthi answering most of the questions but that was such a refreshing change don’t you think? As opposed to her onscreen role of a shy and timid girl? Amulya too had great praises to say about her onscreen sisters since she has no siblings in real life. She was also glad to feel the sibling bond with the rest of the Manjunath sisters. The girls went on to speak about each other’s qualities, likes and dislikes and I must say I am impressed! In such a short time, Ashwini, Mahathi, Priya and Nisha have actually become the four Manjunath sisters at heart!

As usual, the two got quarrelling in the beginning and then came back to the real world to answer fan questions. And can you guess what was the first thing he was asked? ‘Will you get married to Amulya on the show?’ I don’t know about you, but my heart skipped a beat just listening to the question. However, Vedanth gave us the diplomatic answer that we have to stay tuned to see what happens. Other questions about his real life and his opinion about Nisha was asked to and believe it or not, these are offscreen buddies. Since Rakshit recently got married to his soulmate, you will be glad to know that Nisha and Rakshit are friends in real life at least. He also spoke about the fact that he will reveal Gautham’s true image to Amulya, but for that, you will have to stay tuned.

After talking at length to Vedanth and Amulya, Parimala and Padma join the question and answer round. Parimala aka the veteran actress Sudha Narasimha Raju spoke about all her daughters fondly and about Aarthi’s wedding. This is followed by Padma’s opinion about her younger sister Parimala. Soon, Vicky joins them in an all-new avatar that you will see on the show in the near future. Padma praises the bond between Vedanth and Vicky to all the fans. Actor Ravikumar, who plays the role of Manjunath on the show, also joins everyone to talk a little about his character and how he feels about it in real life. The interview is complete when Sarika, Aadya and Sarthak join everyone to talk about their experience.

The cast then excitedly invited the audience to their first Gattimela Jaathre, that is taking place in Raichur, this month. Take a look at their official invite!

Send your best wishes to the cast if you aren’t able to make it in the space given below.

Continue the entertainment on ZEE5 by clicking here.

Paaru's Onscreen Outfits Are A Topic Of Discussion In Every Kannadiga Household!Here's Why