I’m Single, Have A Crush On Nabha Natesh: Abhishek Aka Gattimela’s Vikranth On Love & Life

In this EXCLUSIVE interview, find out about Vicky's celeb crush, his chemistry with Aarthi and his alternative career-choice. It's not what you think! 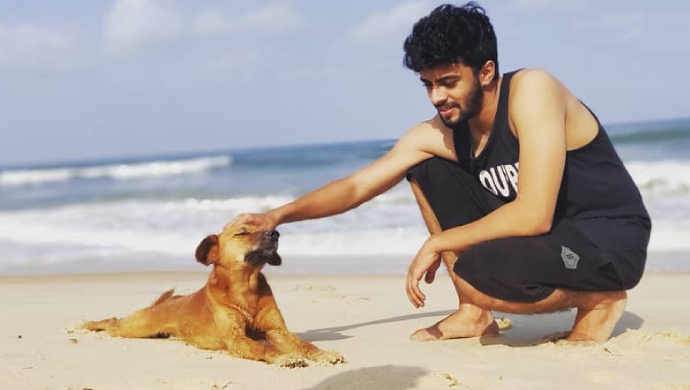 Gattimela’s Vikranth Vashishta, aka Abhishek Das, is a man of few words in real life as opposed to his character onscreen. The show, in particular, has gathered a massive fan following and recently came in the top five shows in the state. It is a beautiful love story with hints of family drama and loads of punch lines to humour you. It’s safe to say that every emotion is covered on the show. At the moment things seem bleak for the Vashishtas and Manjunaths on the show, but let’s keep our finger crossed and hope for a miracle really soon. So after Rakshith’s interview, we decided to surprise you yet again. His onscreen thamma Vicky’s EXCLUSIVE interview has arrived and you will love it. In the ‘Q & A’ session, Abhishek revealed about his celebrity crush in Sandalwood, his chemistry with Aarthi off-screen and much more.

However, before you start, remember what I mentioned before? In real life Abhishek is a man of few words, so the interview was more like a Rapid-fire session, but enjoyable nevertheless. Here the awesome excerpt from the interview for your perusal…

Q. How is your chemistry between Aarthi, on and off-screen?
A. Onscreen, well all of you are anyways seeing how we are, but off-screen, she is a very nice girl. She (Aarthi) is friendly and cares for everyone.

Q. Why aren’t you still committed?
A. Well, in college I recently went through a break-up. It was then that I thought to concentrate more on my career.

Q. Who is your celebrity crush?
A. In Sandalwood, I have a crush on Nabha Natesh.

Q. How does it feel playing the character of Vikranth?
A. About Vicky’s character, I would like to say that it is a wonderful character. He is fun-loving and always has positive vibes to give out. In the beginning, for almost two days I had some difficulties with the role. But now I feel more settled in the character (of Vicky). And people are liking it. The Gattimela team has also received a massive response from fans since the show started, so that is a moment of pride.

how is vikky and aarthi entertaining you all these days? wait n watch for much more twists. #gattimela

Q. Have you ever experienced a fan-proposal or something of the likes till now?
A. Yes, actually, there was a lady who came to me and assumed that I was Vicky in real life too, and said ‘I love you Vicky’ to me. She also asked me for my phone number. They don’t know our personal name, so assuming that I am only Vicky, I have been proposed to a lot.

Q. How do you feel to see such a huge fan-following for you?
A. Yes, of course, it brings me great happiness to see such love. On one hand, we might crib that there is continuous shooting going on with no rest at all but when you see the fruitful benefits from fans, it is totally worth it.

Q. What would you have been today, if you weren’t an actor?
A. If I wasn’t an actor, I would have enrolled in the Commonwealth Games or in the Olympics for swimming. I was a national level swimmer and won four times. I stopped practising in 2014 to concentrate on my acting and modelling career.

Want to know more about this dashing young lad? Stay tuned to the next part of this EXCLUSIVE interview, only on ZEE5.

With inputs from Parinika Uchil and Sanjay BR.

If You Missed The Kamali-Paaru Jaathre On TV, Stream It Here On The Best Entertainment Platform Ever; ZEE5.