Captain Virat Kohli and his Indian team bags in another win and this time against Australia. In attendance were Kiccha, Vijay Mallya and Mahesh Babu. 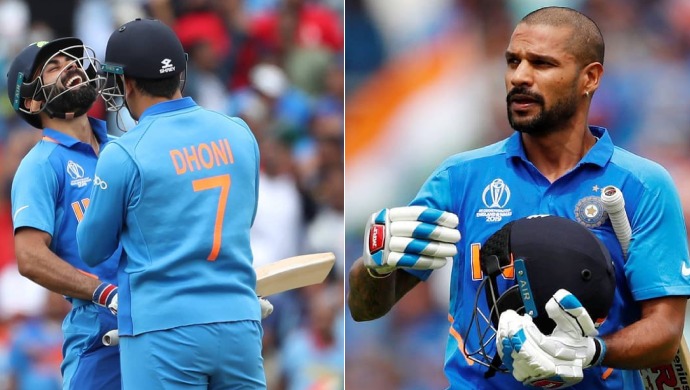 With the high-octane intensity that Cricket fans all over the country shown in support of Virat Kohli and his Indian Team, the ICC World Cup is the one time and everyone comes together in support of their favourite cricketers. It is a fact that many such fans are currently following the Indian team to each country they visit, only to show their love and support. These fans also include some film stars from the industry. From Sandalwood, viral tweets of Kiccha Sudeep have been doing rounds, who apparently was present to witness this beautiful game! Some reports even suggest that Business Tycoon and ex-owner of Royal Challengers Bangalore, Vijay Mallya was present to support the Indian team.

After India won the toss and chose to bat, they made a whopping 352 runs in 50 all thanks to the contributions of Shikhar Dhawan (117 in 109), Virat Kohli (82 in 77) and Rohit Sharma (57 in 70). MSD and Pandya did enough in the few overs they played and managed to hold the fort at the end of the 50 overs. On the bowling end, a commendable mention goes out to not one but three bowlers who fared fabulously in their 10 overs each. Bhuvaneshwar Kumar gave only 50 runs in 10 overs but took three big wickets including that of Steve Smith. Along with him, Jasprit Bumrah showed the world what he is made of by giving the Australian team a ‘maiden over’ in his 10. Also, he gave only 61 runs and took three wickets too. Lastly, the pocket-sized powerhouse Yuzvendra Chahal gave 62 runs in his play and two wickets in return. Combined these three bowlers won India a much-needed victory against Australia.

Now for all the positive news that has been going viral on the internet, here are your favourite cricketers and industry personalities, who have nothing but praise and respect for the Indian Team.

A great team effort by #TeamIndia!
Beating South Africa a few days ago and by winning against the defending champs Australia is a very good sign.
We have sent a signal to the other teams that we mean business at the @cricketworldcup.#INDvAUS #CWC19 pic.twitter.com/XTldkobEwl

Resounding win for India. The batters led by Shikhar were fantastic and I thought the bowlers executed their plans superbly, Bhuvi bowled beautifully. The team bonding looks great and a very promising start to the World Cup for Team India. #INDvAUS pic.twitter.com/q37lNgD9vt

Fantastic Team effort and another clinical win for Team India. Contributions from each of the batsmen and Bhuvi had a very good day with the ball. 2-2 and looking very dangerous. Congratulations India @BCCI #INDvAUS pic.twitter.com/yWwglyKmFD

Not only a great player but also a great ambassador of the game. Absolute class and a brilliant gesture from Virat.
Winning hearts ♥️! #INDvAUS https://t.co/kfBi630WIU

Clinical performance today. We March on to the next one 🙏🙏🇮🇳🇮🇳 #IndvAus #CWC19 pic.twitter.com/FBC1LUgdhH

वाह क्या मैच था 👍 What a power packed win by India today. Great effort by the batsmen & bowlers. This Sunday is definitely a funday in sunny California and I’m loving every bit of it🔥🇮🇳👍🏏 #ting #INDvAUS #BleedBlue #ICCCWC2019 pic.twitter.com/xnRgidwfNh

Great to watch cricket with my son and even sweeter to see India’s emphatic victory over Australia. Congratulations to ⁦@imVkohli⁩ and his team pic.twitter.com/R01aB1WbSA

A great game of cricket played by #TeamIndia.@yuzi_chahal and @Jaspritbumrah93 bowled exceptionally well and gave 🇮🇳 a perfect start.
It was lovely to see @ImRo45 play a mature innings and stay till the end and get us home.#INDvSA #CWC19 #MatchDekhaKya pic.twitter.com/006sOK4J1X

Also, for those of you who don’t know, our superstar Yuvraj Singh has decided to call it quits from Cricket and has officially retired as of this moment. Sachin sent out a heartfelt tweet about it too.

What a fantastic career you have had Yuvi.
You have come out as a true champ everytime the team needed you. The fight you put up through all the ups & downs on & off the field is just amazing. Best of luck for your 2nd innings & thanks for all that you have done for 🇮🇳 Cricket.🙌 pic.twitter.com/J9YlPs87fv

While we are sad about the retirement of such a great cricketer, the Indian team looks forward to their next match against New Zealand on 13th June 2019. This will be followed by the ‘most-awaited’ India-Pakistan match on 16th June 2019.

Give a huge shoutout to these sports stars of our country, in the space below.

Watch your favourite Kannada movies, on your ZEE5 for more entertainment.

Watch The Superhit Jodi Recreation Round On Sa Re Ga Ma Pa Li'l Champs Season 16, Streaming On The ZEE5 Platform