Here Are All The High Points Of The Show Paaru From Last Week, In Case You Missed It

From Damini trying to get Paaru insulted by Akhila to Adi falling deeper for the eyes that are on his brand's logo, here's all that happened last week 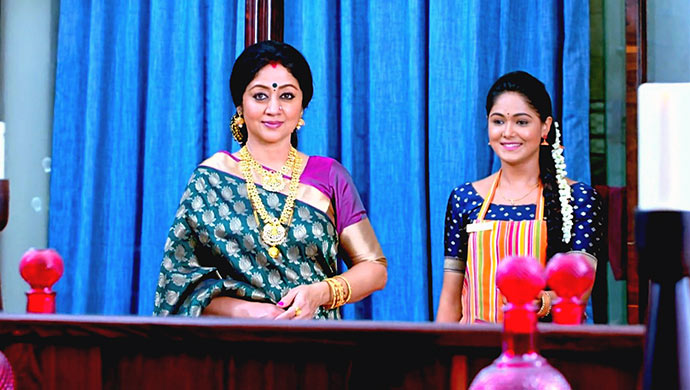 Paaru is a super-interesting show about Parvathi, a simple-minded village girl, who gets a job at Akhilandeshwari’s fortress, thanks to her father Hanumantha (Akhila’s driver)! Since it began, the show has given the viewers nothing but entertainment. If you are a fan and were able to catch all the episodes until now, great! But if you love the show and weren’t able to catch up on what happened on the show recently, its time to take a look at the highlights.

Last week saw a lot of ups and downs in Paaru’s life, starting with Damini’s nice behaviour towards her. While Savithri Amma warned the former of the latter’s misdemeanors, Paaru fell for Damini’s trap anyway. However, Akhila understood her sister-in-law’s ploy and saved Paaru in the end.

On the other hand, Disha purposefully overhears a drunk Preethu’s confession about what he thinks of her and the results are shocking! She then complains to Adi about his brother’s feelings, but in vain.

Soon afterwards, Paaru faces Uma’s wrath when she requests some time in making Heerekai Bondas (a south-Indian snack made of ridge-gourd) for her. Damini picks this as the right opportunity to try and fill Akhila’s head with rubbish about Paaru. Again, in vain!

Elsewhere, Aditya is lost in the eyes of the lady, who is on the logo of his herbal company. He sees nothing but those eyes wherever he looks.

Akhila invites Harish to speak to him about his marriage with Paaru. She too dresses up really well but steps into a daydream which eventually turns into a nightmare! The dream breaks and all is well again. Paaru later explains to Aditya about the issue that is troubling her.

In the night, Akhila is shocked when she overhears Uma’s confession for her older son Adi and does the unthinkable. While Damini continues to add trouble to Paaru’s life, her to-be daughter-in-law Uma ruins all her plans.

In the end, Paaru dresses up Akhila completely as Jaya isn’t available.

What Uma asks Paaru to do later, is something that leaves her flabbergasted.

Will Paaru get into trouble for succumbing to Uma’s pressure? To know what happens, continue to watch the show, this week!

Continue watching the latest episodes of Paaru, only on ZEE5.

In Case You Missed It, Watch The Hemmeya Kannadiga Awards 2019 By Clicking Here Now

11 Gattimela Highlights From Last Week That Are Worth Watching