On his 58th birthday, we bring to you some interesting personal facts about the Crazy Star V Ravichandran. Don’t miss #4, it’s quite surprising! 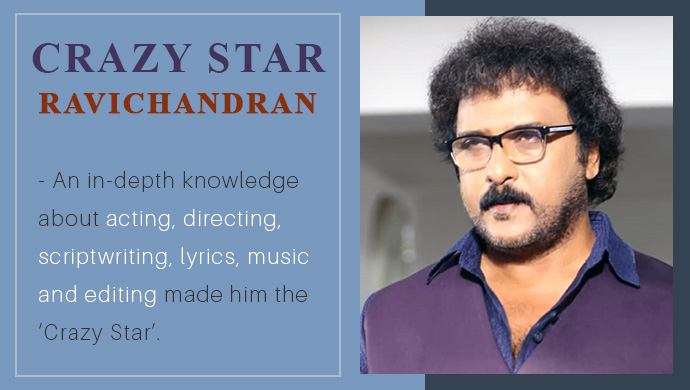 On 30th May 1961, a multi-faceted legend was born in Tamil Nadu. He would later be known as Crazy Star amongst all his abhimanigalu (fans)! Say Happy birthday to Veeraswamy Ravichandran aka V Ravichandran. The experienced actor made his way into the hearts of fans easily because of his multi-faceted talents. Son of the famous yesteryear producer N. Veeraswamy, the Birthday Star was exposed to the film industry from a very young age.

Thus, began his growing interest in the industry. Today, on his birthday we will look at some personal facts about the Crazy Star that might be lesser-known to you:

1. Diversity Of Occupations (The One Man Show)

V Ravichandran is not only an actor but throughout his career, he has also done screenwriting, songwriting, composing, producing, directing, choreographing, distribution, stunts, and art direction. Woah! No wonder the title ‘Crazy Star’. Very few humans can multi-task at such an intense level!

2. Other Names Besides Crazy Star

Yes! The V Ravichandran has been given more than one name by the industry and fans alike. Some of them are Kanasugara, The Showman, Kannada Kala Bhushana, Chitra Bramha etc

3. For The Power Star, Only Two Things Matter

One is his time on sets and the second is his family. His wife Sumathi, daughter Geethanjali and sons Manoranjan and Vikram are his world. The proof is this photo!

4. Accolades For His Life’s Hard Work

Birthday Star V Ravichandran has won many prestigious awards in his career including the Karnataka State Film Award for Best Actor, Director And Music Director for the film Ekangi (2001-2002). Apart from these, he also won the Puttanna Kanagal Award for Lifetime Achievement (2011-2012) and Rajyotsava Award in 2010.

5. His Filmography Is Epic

From his first film Kula Gourava in 1971, where he was a child artist, to his latest venture Kurukshetra (in the post-production phase), V Ravichandran has had an epic ride. But he never gave way to criticism and kept moving forward with each passing movie. More than 100 movies later, the Crazy Star still stands strong with more fans falling in love with him each day!

6. For The Crazy Star Success Or Failure Of Something Is All In The Mind

Besides Namma Shivanna, V Ravichandran is the only other star who doesn’t really care much if the film becomes a hit or not. For him, the character, his involvement in the film and the passion to make a movie is what matters. #Rockstar

7. The Hero Of V Ravichandran Movies

Do i need a Caption for this?

For the Crazy Star, music is the king of films. If you actually go back and take a look at his films, which he made, the emphasis is given to the music score and if you think about it, it makes sense. According to external sources, V Ravichandran claimed that he can make an entire movie on songs, but can never make a film without one.

Are you a fan of the star? Wish him on his birthday in the box below.

Watch the Crazy Star’s collection of movies, streaming for free on the ZEE5 platform.

Akhilandeshwari’s Life Is In Danger, Will Paaru Be Able To Stop Makrand And Save Her?