How Dance Karnataka Dance Is Showing Us The Real Side Of Adithi, Ningi & Nanditha

Is Vikranth Vashishta of Gattimela an immature person in real life? Is Anika Mahajan of Kamali an evil person? Thanks To DKD we know their real side! 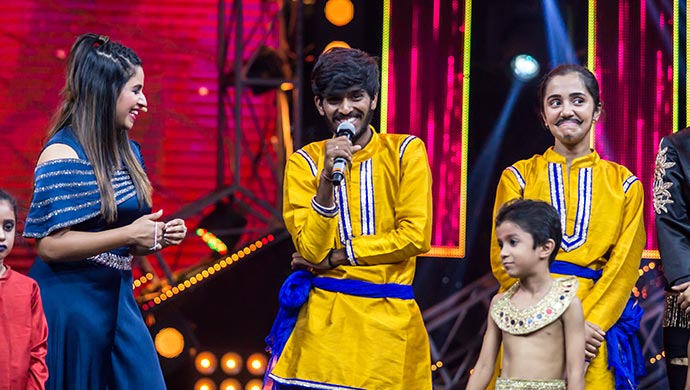 Dance Karnataka Dance Family War 2, has begun in full swing and life is well again. After a mega-blockbuster Grand Premiere, the 12 pairs of contestants participated last week in the first round aka the ‘Freestyle Round’. In it, the dancers were asked to perform on whichever style of dance they are most comfortable with. While many did well like Suraj and Minchu from the Comedy Khiladigalu fame, many others were asked to prepare better the next round like Vikranth and Adithi from the most popular Kannada show Gattimela. Since the competition has just begun there is so much potential in all jodis to bring forth their best to the table and we have no doubts!

An interesting fact if you may have noticed is that, unlike their onscreen personas, Zee Kannada actors are very different in real life. This is another perk of having such a concept like Dance Karnataka Dance Family War because such reality shows allow us to know more about the personal lives of our favourite actors. On that note, since we already know our reality show contestants like Dimpanna and Anoop from Drama Juniors or Lokesh and Manthana from Comedy Khiladigalu, today let’s look at how Zee Kannada actors from shows like Mahadevi, Gattimela, Kamali, are, shall we?

Ankietha, popularly known as Ningi on the hit show Kamali, is a happy-go-lucky girl onscreen, but off-screen, she is all that and more. While onscreen she may seem immature at times but from the two episodes that we saw her in, her maturity to have a dance partner like Barkath Ali from Comedy Khiladigalu proves just how mature she is. On the other hand, Rachana Smith is the complete opposite of Anika Mahajan, her onscreen antagonist character. The proof was when she cried when Rakshitha Prem praised her efforts of dancing in the Grand Premiere. Apart from this, Rachana is also an amazing rapper in real life, in case you didn’t know.

Like Ningi, Sid Moolimani aka Preethu from the show Paaru is somewhat like his onscreen persona. He is a cool guy and an amazing dancer. Sid is partnered with Anika (Rachana Smith) in this competition, so let’s say potential wise these two have a good opportunity to prepare and get better till the finals. But, having said that, you rarely see Preethu not smiling or cheering for someone else on the show.

Both Gagana and Vivek, who play the characters of Soorya and Hiranmayi on the show Mahadevi, are very different in reality. Gagana is more a modern and trendy lass of today’s time while Vivek is absolutely not the evil monster he plays on the show. Since he came last season on Dance Karnataka Dance Family War, the judges already love Vivek, only because of his funny and quirky shenanigans.

Abhishek Sen aka Vicky, who is supposed to be an upbeat but immature man onscreen, is actually a very shy and quiet person in real life. He rarely says much and we can make out when he is on stage that he means business, i.e, dancing. He concentrates on the feedback and works towards it. Namma Priya Achar, also known as Adithi Manjunath, is technically very similar to her real personality. She is happy almost always and doesn’t let anything take away that smile on her face. This is what Amulya Manjunath (Nisha Ravikrishnan) had mentioned in a Gattimela interview earlier.

A very interesting character was the antagonist Nanditha on the show Jodi Hakki. Pallavi Gowda, who played this role is a dancer in real life. Not only this, she is a very delicate lady, whose soft-spoken persona just won my heart. Did you ever think that Nanditha, out of all the people will be soft-spoken? I actually used to get scared looking at her fierce persona onscreen. Thanks to Dance Karnataka Dance Family War 2, now I know what a gem of a person she really is.

Unfortunately for Yukthi Naidu aka Pranathi from Bramhagantu, her partner Rakshit, who goes by the onscreen name of Subbu on the show was injured in the Grand Premiere. Due to a ligament tear, Subbu won’t be able to perform until the end of December. Despite all this Yukthi took everything sportingly and came back with a bang! Last week on DKDFW 2, she gave a mind-blowing solo performance causing the judges to appreciate her determination to be on the show. Rakshitha Prem then promised Yukthi by this week, she will have a new partner. Let’s wait and see who it will be.

One is the hero of the show while the other is the antagonist. Prashanth and Nethra, who play the roles of Ashok and Bhavana on the horror show Aathma Bandhana, are two humble human beings and very different from their on-screen characters. Nethra is a very cheerful person in real life, while Prashanth is a matured individual unlike his character of Ashok, who is kind of unstable.

Which person’s real persona surprised you the most? Speak to us through the space provided below.

If You Missed The Quarter-Finals Of Sa Re Ga Ma Pa Li'l Champs Season 16, Click Here To Watch The Episodes, Streaming Only On The ZEE5 Platform